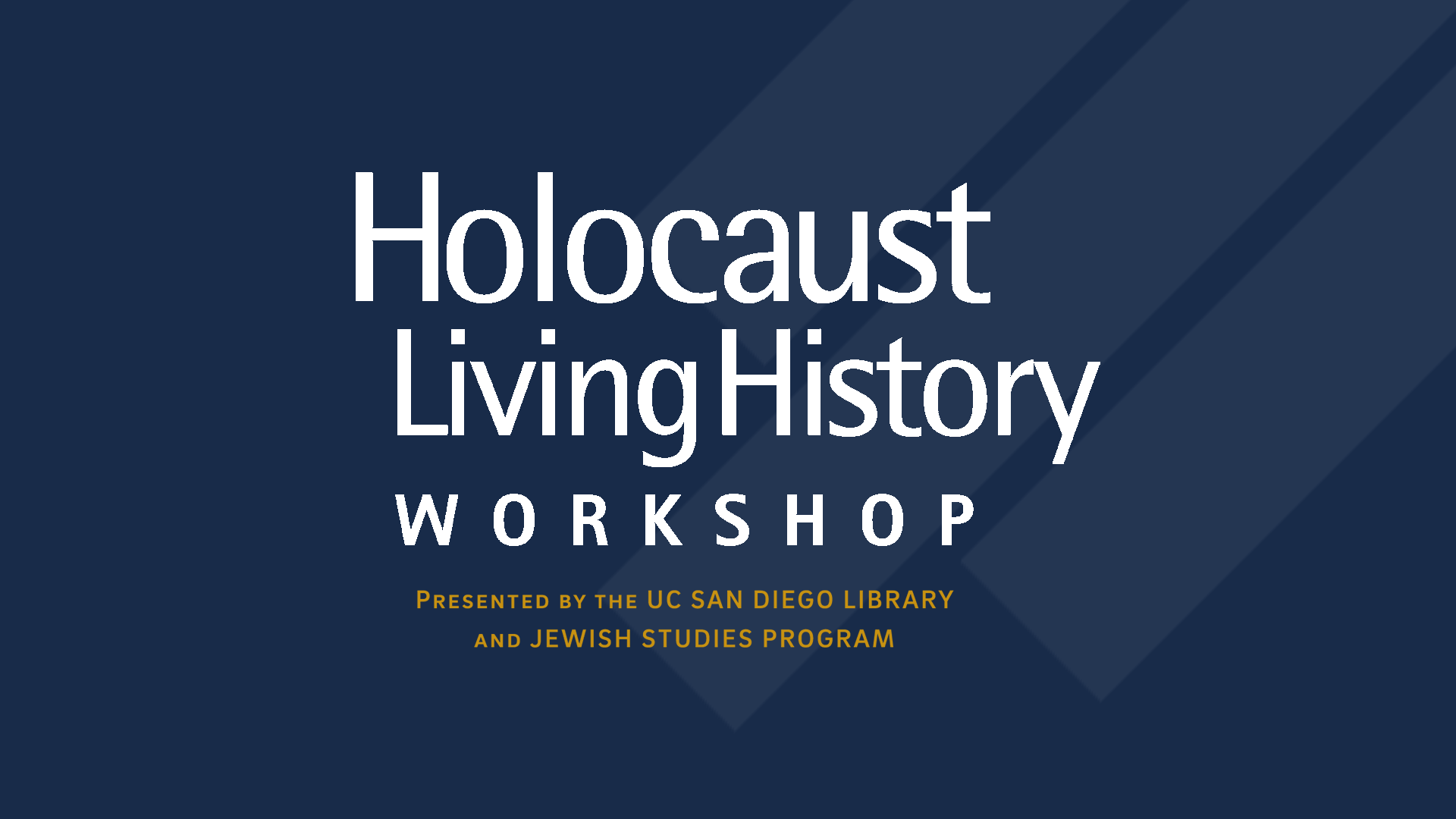 Established in 2008 as a collaborative project between the UC San Diego Jewish Studies Program and the UC San Diego Library, HLHW aims to broaden understanding of the past, foster tolerance and preserve the memory of victims and survivors of the Holocaust while emphasizing their continued relevance in the world today.

Members of the public and campus community are invited to attend these free events to hear personal stories and memories from Holocaust survivors, witnesses, relatives and scholars. Remaining lectures in the 2022-2023 workshop series include:

What’s Fascism Got to Do With It? The Ideological Origins of the Holocaust featuring Federico Finchelstein

Twentieth-century fascism was a political ideology encompassing totalitarianism, state terrorism, imperialism, racism, and, in Germany’s case, the most radical genocide of the last century: the Holocaust. Historians of the Holocaust tend to reject the notion of fascism as a causal explanation for its origins. Conversely, scholars of fascism present the Shoah as a particular event that is not central to fascist historiography. In this lecture, Federico Finchelstein examines the challenge the Holocaust presents to the transnational history of ideology and politics.

A leading contemporary authority on global fascism, Finchelstein is professor of history at the New School for Social Research and Eugene Lang College and director of the Janey Program in Latin American Studies at NSSR.

This event will be held in the Seuss Room at Geisel Library. There will also be a virtual option for those who prefer to join online. Registration is open and required. This event has been made possible by sponsor July Teper Galper in memory of her mother.

In Spring 1967, history teacher Ron Jones conducted a social experiment in fascism with his class of 10th-grade 15-year-olds. In a social studies class at Cubberley High School, Palo Alto, students were given the opportunity to experience the rise and attraction of Nazism, complete with drill-like discipline, salute, banners, and membership cards. Within a week the experiment began to spin out of control. Over the years the story of “The Wave” has attracted widespread attention through films, books, plays and musicals.

The screening of “Lesson Plan,” directed by Philip Neel, is followed by a conversation featuring Ron Jones and former students Mark Hancock and Philip Neel. The discussion will be moderated by Dr. Joel Dimsdale, Professor of Psychiatry emeritus and the author of “Dark Persuasion: A History of Brainwashing from Pavlov to Social Media.” For more information on The Wave please visit thewavehome.com.

Registration is open and required. This event has been made possible by sponsors Nancy and Joel Dimsdale.

Love in the Shadow of Genocide: The Intimate Life of German Jews after the Holocaust featuring Christian Bailey

How could young Jews imagine falling in love and building a family in post-Holocaust Germany? In this talk, Christian Bailey explores Jewish love relationships across the turbulent 100 years from German unification to the first decades after the Holocaust. Whereas Jewish suitors before 1933 might imagine a good marriage as a springboard for success in German society, those who survived the Shoah usually looked forward to a future anywhere but in Germany. Yet some Jews decided to settle in the country of the perpetrators. In contrast to earlier generations who may have thought their search for a loving family life made them typically German, Holocaust survivors primarily valued familial love as a sign of Jewish endurance in the face of German hostility.

Professor Bailey earned his Ph.D. in history from Yale University and is currently an assistant professor of history and a contributing member of the gender studies faculty at Purchase College SUNY.

Registration is required; details forthcoming. This event has been made possible by sponsor Thurgood Marshall College, UC San Diego.

A Conversation with Art Spiegelman, Pulitzer Prize-Winning Artist/Illustrator and Author of “Maus”

Art Spiegelman almost single-handedly brought comic books out of the toy closet and onto the literature shelves. In 1992, he won the Pulitzer Prize for his masterful Holocaust narrative “Maus” which portrayed Jews as mice and Nazis as cats. “Maus II” continued the remarkable story of his parents’ survival of the Nazi regime and their lives later in America.

Spiegelman’s many distinguished honors include the Angoulême International Comics Festival Best Foreign Album Award, the Eisner Award, the Los Angeles Times Book Prize for Fiction, the Edward MacDowell Medal, and the honorary National Book Award for Distinguished Contribution to American Letters. Named one of Time Magazine’s 100 Most Influential People and an elected member of the American Academy of Arts and Letters, Spiegelman continues to feature prominently in American cultural life.

On September 12, 1939, barely two weeks into the German invasion of Poland, the childhood of nine-year old Nathan Poremba came to an abrupt end when his father was murdered outside his hometown of Wieliczka. For the next five and a half years, Nathan managed to outwit the Nazis through determination and sheer will. Repeatedly tempting fate, he refused to wear the required Star of David armband, snuck around Wieliczka, and purchased illegal train tickets.

After obtaining false papers bearing the name of a dead Christian boy named “Staszek Surdel”, Nathan worked at various jobs and survived two concentration camps, convincing Poles and Germans alike that he was Polish. It would take him half a century to begin talking about his harrowing ordeal. Joel Poremba’s account of his father’s improbable Holocaust survival, published in book form in 2021, constitutes a fitting tribute to a life of extreme hardship and endurance.

Orange County resident Joel Poremba, a graduate of Western State University, College of Law, and the University of California San Diego with a degree in political science, is a business attorney with twenty-four years of litigation experience in both state and federal courts.

Registration is required; details forthcoming. This event has been made possible by The Lou Dunst Memorial Lecture.

Among the most striking exhibits at the Auschwitz museum are undoubtedly the mountains of loot stolen from Jews murdered upon arrival. Shoes, suitcases, spectacles, and more fill entire rooms in the former barracks of the main camp. Surviving the Shoah when their owners did not, they constitute a potent proof of the Nazis’ abiding concern with material gain.

In this talk, Peter Hayes traces the ways by which the German corporate world became deeply implicated in — and in many respects indispensable to — the Nazi regime’s persecution, exploitation, and murder of Europe’s Jews. He argues that these developments stemmed inexorably from decisions made and actions taken by the nation’s leading corporate executives in 1933, at the very outset of Nazi rule. From 1980 to 2016 Peter Hayes was a professor of history at Northwestern University.

Registration is required; details forthcoming. This event has been made possible by sponsor Judi Gottschalk.

In addition to the public lecture series, the HLHW engages local students, teachers, interested community members and Holocaust survivors and their families through use of USC Shoah Foundation’s Visual History Archive. The Archive is the world’s largest online database of videotaped testimonies by Holocaust survivors and witnesses, and the UC San Diego Library is the only institution in the San Diego region to have access to its resources.

For more information about UC San Diego’s Holocaust Living History Workshop, contact Susanne Hillman at shillman@ucsd.edu. If you have questions or would like to register by phone, contact us at UCSDLibrary@ucsd.edu or (858) 534-0134.

ABOUT THE UC SAN DIEGO LIBRARY

The UC San Diego Library, ranked among the nation’s top 25 public academic libraries, plays a critical role in advancing and supporting the university’s research, teaching, patient care and public service missions. The world-renowned research for which UC San Diego is known starts at the Library, which provides the foundation of knowledge necessary to advance cutting-edge discoveries in a wide range of disciplines, from healthcare and science to public policy and the arts. Join the conversation on Facebook, Instagram, Twitter and LinkedIn.

ABOUT THE HOLOCAUST LIVING HISTORY WORKSHOP

The Holocaust Living History Workshop (HLHW) series is an education and outreach program sponsored by the UC San Diego Library and the Jewish Studies program. It aims to preserve the memories of the victims and survivors of the Holocaust by offering public events involving witnesses, descendants and scholars and through the use of the USC Shoah Foundation’s Visual History Archive. Past HLHW workshops are now part of the Library’s digital collections and can be accessed online.