Photographs and sound recordings taken by American anthropologist, Roy A. Rappaport (b. 1926 - d. 1997), documenting research in the highlands of Papua New Guinea, where he studied the social life, rituals and ecology of the Maring-speaking people, particularly those belonging to the Tsembaga clan cluster living in the Simbai Valley of Madang Province. The photographs include agricultural practices, material culture such as house and bridge-building, and a year-long ritual cycle. Pig sacrifices, dance and music, ceremonial exchange, and elaborate feather headdresses and wigs are among the topics portrayed. Also included are photographs taken in the Adelbert Range of Madang Province, and images created in the context of archaeological work in 1960 in French Polynesia, particularly on Moorea and Tahiti.

The sound recordings were made during his fieldwork and are arranged in two groups. A) Reel-to-Reel: 16 recordings made during Rappaport's 1962-1963 fieldwork in New Guinea documenting linguistic exercises, Maring dialogue, recording instructions, chanting, drumming, and singing. B) Audio Cassettes: 29 cassette tapes recorded during Rappaport's 1981-1982 fieldwork in New Guinea. These tapes document court cases, religious ceremonies, popular songs, and interviews. The sound recordings were digitized through support by a Recordings at Risk grant from the Council on Library and Information Resources (CLIR). The grant program is made possible by funding from The Andrew W. Mellon Foundation. Sound recordings are available upon request and registration.

Some content in this collection may be moderated due to cultural sensitivity. Please refer to the UC San Diego Library’s Historical Context and Cultural Sensitivity Statement for more information. 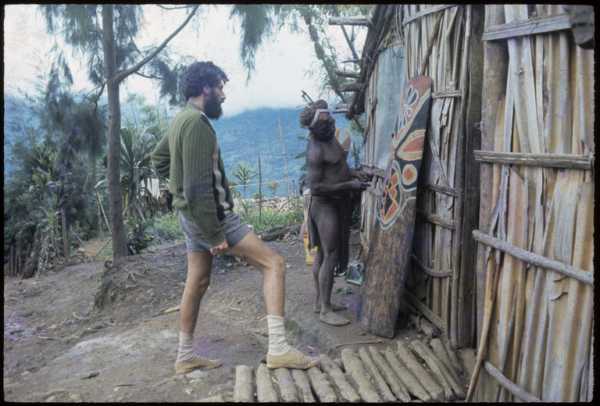