“The Legacy of Jonas Salk” Exhibit on Display at Geisel Library thru Jan. 10, 2016 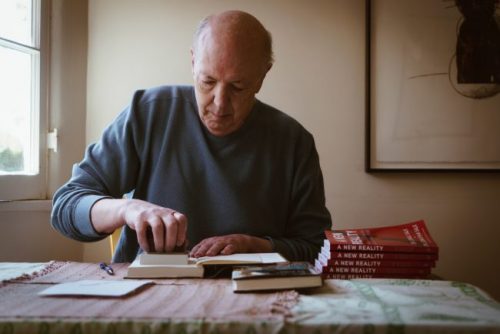 Fall 2015 marks the close of world-renowned scientist Jonas Salk’s centenary year. To mark the occasion, the UC San Diego Library is presenting “The Legacy of Jonas Salk,” an exhibition of materials from the Jonas Salk Papers, which will be on display in Geisel Library through January 10, 2016. The papers—which comprise more than 600 linear feet (or nearly 1000 boxes)—were donated to the Library’s Mandeville Special Collections in 2013 by Salk’s sons, Peter, Darrell, and Jonathan, all of whom—like their father—trained as physicians and are involved in medical and scientific activities.

According to Lynda Claassen, director of the Library’s Special Collections & Archives Program, the papers document Jonas Salk’s professional and scientific activities from the mid-1940s to his death in 1995.  Especially well-documented are activities related to the development of the Salk polio vaccine in the mid-1950s to the early 1960s and the founding of the Salk Institute. The papers cover general correspondence, files relating to polio, his writings and philosophy, photographs, artifacts—including two dictating machines—personal writings, and various research materials.

“The archive represents the enormous scope of our father’s creativity and productivity,” said Jonathan Salk. “This collection of his papers and the insight to be gained into how he approached and solved problems might be his greatest legacy. He would be pleased to find that his life’s work was continuing to do good for the world.“

On October 30, approximately 150 supporters of the UC San Diego Library, friends of the Salk family, and members of the campus and local communities attended a reception and program to celebrate Jonas Salk’s work, unique qualities, and extraordinary legacy. The program, “Creativity, Culture, and Community: The Legacy of Jonas Salk,” was sponsored by the Jonas Salk Legacy Foundation and the UC San Diego Library. The event featured a thought-provoking and illuminating conversation between Dr. Peter Salk; Dr. Jonathan Salk; and UC San Diego author, faculty member, and dean, Mary Walshok. The conversation, which was taped by UCTV for future broadcast, beginning November 23 on the Library Channel, was moderated by Gary Robbins, science editor for the San Diego Union-Tribune.

“We are very pleased that we could pay tribute to Jonas Salk and the ideals he cherished with this program,” said Brian E. C. Schottlaender, The Audrey Geisel University Librarian at UC San Diego. “Dr. Salk is remembered by many as a scientist who developed the vaccine that wiped out a terrifying childhood disease. People know less about Jonas Salk the humanist, who cared deeply about the impact of science on the public sphere, and championed interdisciplinary approaches and human creativity to address some of the world’s most vexing problems. We are very grateful to Peter, Darrell, and Jonathan Salk for the generous donation of their father’s papers, and are honored that Peter and Jonathan could participate in this special program to shed light on their father’s vision.”

“The Legacy of Jonas Salk” exhibit includes a wide range of materials selected from the Jonas Salk Papers, the largest archival collection in the UC San Diego Library, including: hand-written letters and drawings from children; a photograph of Jonathan Salk as a child being administered the Salk polio vaccine by his father; and correspondence from President Eisenhower, who presented Salk with a Presidential Citation in 1955. Also included are copies of the four books Jonas Salk authored, and presentation notes from the report of the polio vaccine field trial results in 1955.

The exhibit sheds light on Salk’s research, which caught the attention of Basil O’Connor, then president of the National Foundation for Infantile Paralysis. The organization decided to fund Salk’s efforts to develop a killed virus vaccine against what was at the time considered the country’s most formidable disease—paralytic poliomyelitis. The fear and anxiety that polio generated during the first half of the century dissipated with the vaccine’s success in 1955. Jonas Salk became an international hero, and spent the next several years conducting follow-up studies on the vaccine and communicating the scientific principles behind it.

The Salk archive includes correspondence with a number of prominent scientists and other luminaries, such as Basil O’Connor and officers of the National Foundation for Infantile Paralysis/March of Dimes; immunologists Thomas Francis and Albert Sabin; physicist and biologist Leo Szilard; mathematician and philosopher Jacob Bronowski; Louis Kahn, the architect who designed the iconic Salk Institute in the early 1960s; and a wide variety of world leaders.

The gift of the collection of their father’s papers to the Library’s Mandeville Special Collections was dedicated by Salk’s sons to the administrative, technical and support staff who worked with their father during his more than fifty-year career and with whom he shared lasting relationships of mutual respect and admiration. The sons point out that the commitment, skills, patience and loyalty of his co-workers are reflected throughout these records.

In addition to the papers of Jonas Salk, the Library’s Mandeville Special Collections houses the papers of some of the world’s most prominent and accomplished scientists, including Stanley Miller and Leo Szilard, as well as Nobel Laureates Francis Crick, Harold Urey, Hannes Alfven, and Maria Goeppert Mayer.