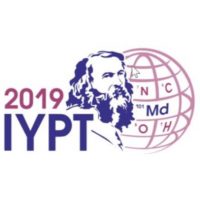 In this second in our series celebrating the International Year of the Periodic Table, we’ll highlight the early versions developed by Dmitri Mendeleev.

The Complete Dictionary of Scientific Biography offers a good, encyclopedia-length article about Mendeleev. For a briefer article, see Chemistry World‘s “The father of the periodic table” (Mike Sutton), which also includes Mendeleev’s early sketch in 1869, created while he was working on the second volume of his chemistry textbook.

Mendeleev laid out his cards in columns and rows, as if in a game of solitaire or patience – a favourite pastime of his during railway journeys. The vertical columns listed the known elements in order of increasing atomic weight, with a new column being started whenever this enabled him to fit elements with similar characteristics into the same horizontal row.

From “Finding the Periodic Table,” by David Allen for the Royal Society of Chemistry:

Mendeleev’s table listed elements in rows or columns in order of atomic weight, starting a new row or column when the characteristics of the elements began to repeat. What made his version successful was the fact that he left gaps where there appeared to be an element missing that had not yet been discovered. He also thought to occasionally ignore the order suggested by the atomic weights and to switch adjacent elements where they could be better classified into chemical families. Atomic numbers were not yet known, but the atomic weights worked well enough for ordering most of the elements, and Mendeleev was able to accurately predict the properties of missing elements.

The table was presented to the Russian Chemical Society in March 1869, and later that year was published as an abstract in Zeitschrift für Chemie. Le Moyne College professor Carmen Guinta has provided an English translation of “On the Relationship of the Properties of the Elements to their Atomic Weights” with some additional notes on the Elements and Atoms collection at his Classic Chemistry site. The question marks, later blanks in the 1871 version of the table included in his textbook, represent those as-yet-undiscovered elements that Mendeleev predicted, including gallium (1875), scandium (1879), and germanium (1885). These were added to the periodic table as they were discovered.

Mendeleev’s “The Periodic Law of the Chemical Elements,” written for a French journal in 1879, was translated later that year for The Chemical News in response to attention since two of the predicted elements had since been discovered. It was published across multiple issues, starting with a letter from Mendeleev in the November 14, 1879 issue. The article begins in the next issue, continues in the subsequent issues until December 26, picks up again in the January 2, 1880 issue, and continues until the last section was published in March 19, 1880.

The Periodic Table continued to develop beyond Mendeleev’s model. The noble gases were added after most were isolated and discovered in the 1890s. They were initially placed to the left of the other elements as Group 0, as seen in the 3rd English edition from 1905.

From “How the periodic table went from a sketch to an enduring masterpiece” by Tom Sigfried for Science News:

Atomic weight was closely related to [Henry] Moseley’s atomic number — close enough that ordering elements by weight differs in only a few spots from ordering by number. Mendeleev had insisted that those weights were wrong and needed to be remeasured, and in some cases he was right. A few discrepancies remained, but Moseley’s atomic number set the table straight.

The modern form, a horizontal design in contrast with Mendeleev’s original vertical version, became widely popular only after World War II, largely due to the work of the American chemist Glenn Seaborg (a longtime member of the board of Science Service, the original publisher of Science News).

Seaborg and collaborators had synthetically produced several new elements with atomic numbers beyond uranium, the last naturally occurring element in the table. Seaborg saw that these elements, the transuranics (plus the three elements preceding uranium) demanded a new row in the table, something Mendeleev had not foreseen. Seaborg’s table added the row for those elements beneath a similar row for the rare earth elements, whose proper place had never been quite clear, either.