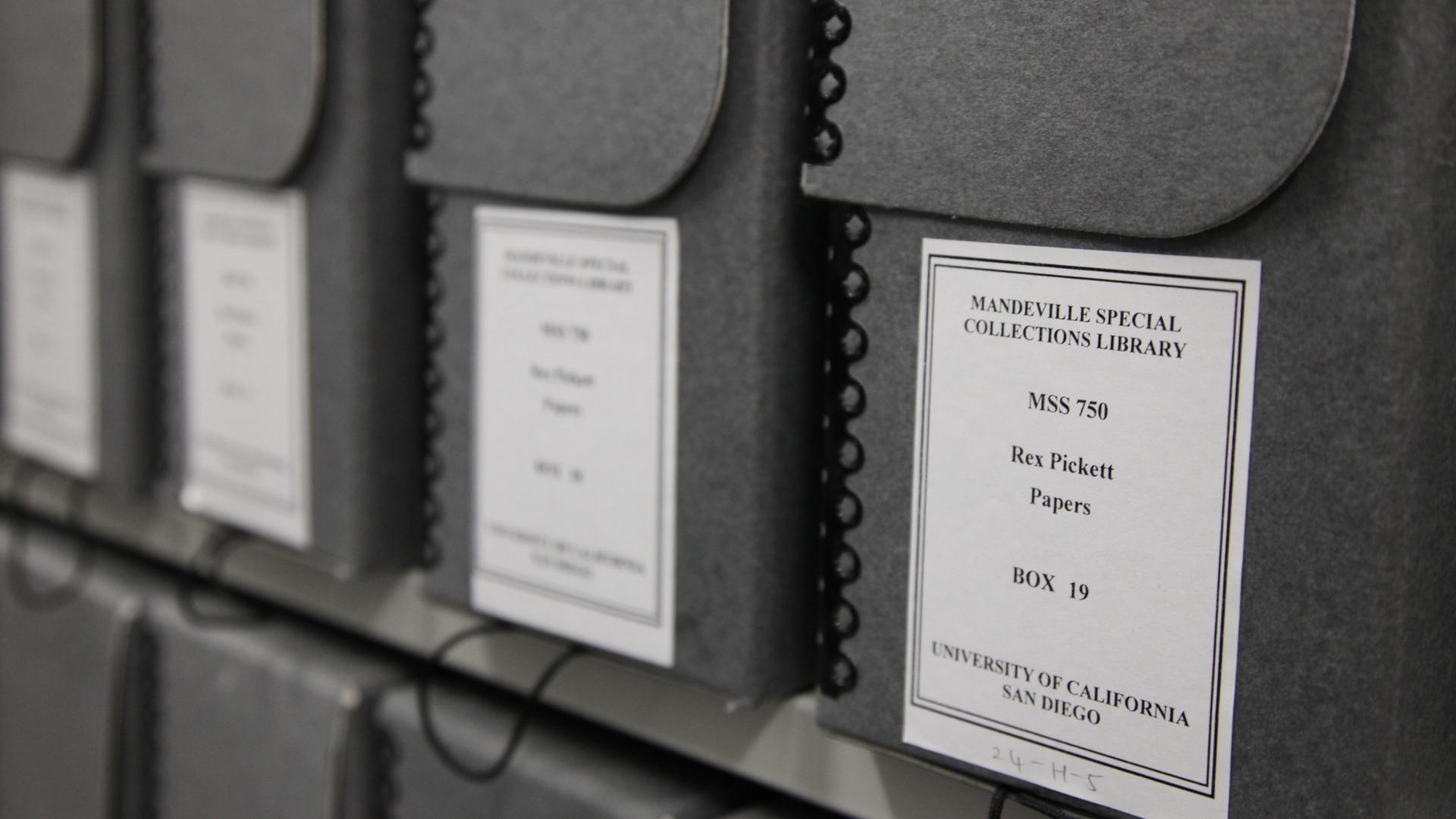 When Rex Pickett talks about UC San Diego, it is clear that the Library holds a special place in his life. From his time as a student to his career as a writer and filmmaker, the Library has served as more than just a place for him to study or read; it was where a world of opportunities and imagination opened up to him. “It wasn’t just a second home to me,” he says. “It was home to me.” Thus, it is only fitting that his life has come full circle and brought him back to Geisel Library, where it all began.

Pickett is a renowned author, UC San Diego alumnus and longtime patron and champion of the Library. His newest book “The Archivist,” published in November 2021, is set in a fictionalized version of our very own Geisel Library and pays homage to the place that helped shape the person who Pickett has become.

A San Diego native, Pickett recalls the establishment of UC San Diego, calling it a “magical place for the residents who hoped to go on and make something out of their lives.” When he began attending the university, Pickett spent much of his time in what was then known as the Central Library. He would take the elevator to the 7th Floor—his favorite—and immerse himself in the stacks of literature for hours. “I spent hours and hours there, reading, thinking, imagining, pullulating ideas, writing madly in journals,” he says. “I wanted so badly to have my own books on those shelves one day.”

After graduating in 1976 with a degree in literary and film criticism and creative writing, Pickett moved to Los Angeles to write screenplays and make indie films. In 2000, the film based on his screenplay “My Mother Dreams the Satan’s Disciples in New York” won the Oscar for Best Live Action Short, and in 2004, his novel “Sideways” was made into an Oscar-winning film. Even though he had physically moved away from the Library, Pickett says that the Library never left him—everywhere he went, he endeavored to recreate the same intellectually stimulating atmosphere that Geisel Library offered.

In 2012, Pickett donated his writings, films and memorabilia to the Library’s Special Collections & Archives. Several months later, he attended a dinner at the Faculty Club to celebrate the premiere of the musical adaptation of “Sideways” at the La Jolla Playhouse. Up until then, Pickett had no idea what had become of the 50 boxes he had dropped off at Geisel Library. “Part of me wondered if they hadn’t just gone into storage,” says Pickett. Nothing could be further from the truth.

Following the dinner, Pickett was approached by Kate Saeed, who introduced herself as the person responsible for processing the Rex Pickett Papers. Saeed invited him to Special Collections & Archives to view the collection. When he saw the shelves and boxes where his works were processed and organized, Pickett was overcome with emotion. “It was an emotional coming home for me, and it was then and there that I knew I had to write about this feeling that was suffusing me. Thus was born ‘The Archivist,’ set, of course, in the only library I know and love.”

What started as an eight-episode limited series, all of which was written on the 8th Floor of Geisel Library, eventually turned into a murder mystery novel about a project archivist hired by a university library to process the papers of a notable author. As for where the story takes place, there was never any question that Geisel Library would be the backdrop for the plot. “Because the Rex Pickett Papers are stored and cared for in Geisel, there was no other library that was ever going to be used in the novel,” Pickett explains.

More importantly, Pickett credits Saeed for inspiring the idea for the titular character of the novel. “I cannot emphasize how much Kate had to do with engendering the ideation of ‘The Archivist’ and inspiring me to write the novel that would give fictional life to her profession and what archivists do,” he says. Indeed, “The Archivist” is a love letter to the important work that archivists do to preserve and organize historical records—something Pickett says we need now more than ever in order to know, explore, interpret and study the past.

Pickett will be speaking at a Library-hosted event in Spring 2022. Stay tuned for details.