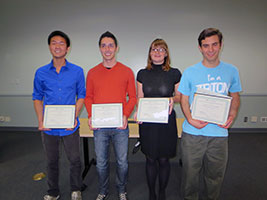 Four undergraduate students at the University of California, San Diego, whose research topics ranged from Bronze Age artifacts and micrometers to college admissions practices and the symmetry of protein structure, have been awarded the 2013 Undergraduate Library Research Prize.

Co-sponsored by the UC San Diego Library, the UCSD Alumni Association, and the Vice Chancellor for Student Affairs, the annual prize includes cash awards of $1000 and $500 for first and second place, respectively. Awards are given in two categories: Social Sciences/ Arts/Humanities, and Physical and Life Sciences.

“These students clearly demonstrated the outstanding research skills needed to excel at a major research university such as UC San Diego,” said Brian E. C. Schottlaender, the University’s Audrey Geisel University Librarian. “This year’s winners have set the bar pretty high for future student researchers. They have learned that good academic research does not happen without careful, studious, and strategic library research. Undergraduate research is such an important part of our students’ education, so we are pleased that we can continue to support and recognize—with our partners in Student Affairs and Alumni Affairs—these achievements.”

To be considered for the Undergraduate Libraries Research Prize, students must be nominated by faculty members and must participate in either the annual UC San Diego Undergraduate Research Conference held in the spring, or in other university programs that foster and recognize student research and scholarship. The Undergraduate Research Conference is one of three major undergraduate scholarly meetings that the Academic Enrichment Programs coordinate each year that afford students from all academic disciplines the opportunity to present findings of research conducted under the guidance of UC San Diego faculty members.

“This year’s Undergraduate Library Research Prize winners have demonstrated impressive  intellectual prowess,” said Alan Houston, the University’s interim Vice Chancellor for Student Affairs. They have taken full advantage of the Library’s abundant resources. We are delighted to applaud their efforts!”

“The Library provides the needed infrastructure for serious research at a university like UC San Diego,” said Armin Afsahi, Assistant Vice Chancellor for Alumni Affairs at UC San Diego. “Consequently, it is very gratifying to see our students’ ability to expertly utilize the Library’s rich and diverse information resources.  I know this skillset will help in their current as well as  future success, both in and their academic careers and beyond. Alumni Affairs is honored to collaborate with the Library and Student Affairs in recognizing this year’s prize winners.”

David Artis, dean of Undergraduate Research Initiatives for Student Affairs, said that his office was very pleased to be involved in the Library Research Prize, and he continues to be very impressed with the caliber of the student researchers.

“First, the quality of the work is consistently excellent; second, the recognition of these students generates excitement about research among all undergraduates; and third, it highlights the way so many units at UC San Diego collaborate to support the aspirations of our students.”

In the Social Sciences/Arts/Humanities category, first prize went to Kathleen Huggins, a Muir College senior, for her project, “Breaking the Ingot out of the Mold: A Practical Approach to Technological Ceramics.” She was nominated by Thomas Levy, professor of Anthropology. Huggins’ research centered on critically examining a collection of metallurgical artifacts from a Late Bronze Age copper production center located in Southern Jordan, where she traveled with a research team. Professor Levy noted “Kathleen’s ability to engage scholarly materials at the graduate student level is impressive. The texts she has selected have been solid background material for the beginnings of archaeological research.”

Second prize in this category was awarded to Andres Albarran, fourth year student at Sixth College, nominated by Frances Contreras, Ethnic Studies professor. His research centered on college admissions practices and public policy in California. Members of the prize jury agreed with Professor Contreras, who noted “These efforts are above and beyond the average undergraduate and exemplify his unique research skills and tenacity that will serve him well as he transitions to graduate school.”

First prize in the Life and Physical Sciences category went to Douglas Myers-Turnbull, fourth year student at Marshall College, whose research project was titled “Symmetry and Protein Fold Space.” His work focused on the computational analysis of the symmetry of protein structure, an investigation which is important to research in evolution, protein structure, human disease, and drug discovery. Myers-Turnbull was nominated by Phillip Bourne, CSE (bioinformatics) professor, who noted “Douglas has shown marked resourcefulness in identifying relevant and meaningful prior literature. Moreover, he has developed a consistent and thorough methodology for using these resources to aid our understanding of the results.”

Second prize went to Allen Pei, third year student at Revelle College, nominated by Joseph Wang, professor of Nanoengineering/Applied Mathematics. Pei’s research, “Towards Water-Driven Micrometers,” focused on developing and fabricating advanced nanomachines and nanomotors that could self-propel in water without external fuels. Wang noted that “Allen’s work is extremely novel and cutting edge and he shows extremely high potential for his future pursuits in research.”

Ranked among the nation’s top 25 public academic research libraries, the UC San Diego Library plays an integral role in advancing and supporting the university’s research, teaching, and public service missions. As the intellectual heart of the UC campus, the university library provides access to more than seven million digital and print volumes, journals, and multimedia materials to meet the knowledge and information needs of faculty, students and members of the public. Each day, the Library’s vast resources are accessed nearly 90,000 times through the main Web site. For more information: http://libraries.ucsd.edu.