Mengele: Unmasking the “Angel of Death” with David Marwell 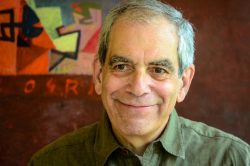 Who was Josef Mengele? After the end of the Holocaust, the German physician has been increasingly viewed as the personification of supreme evil both in the minds of survivors and the public at large. In this lecture based on his highly acclaimed book “Mengele,” David Marwell untangles history and myth surrounding the man known variously as the Angel of Death and the good uncle, suggesting that Mengele was not so much a uniquely monstrous perpetrator, but more a willing part of a monstrous machine of destruction.

Marwell has had a distinguished career as chief of investigative research at the US Department of Justice, associate museum director at the United States Holocaust Memorial Museum, and director and CEO of the Museum of Jewish Heritage in New York City.