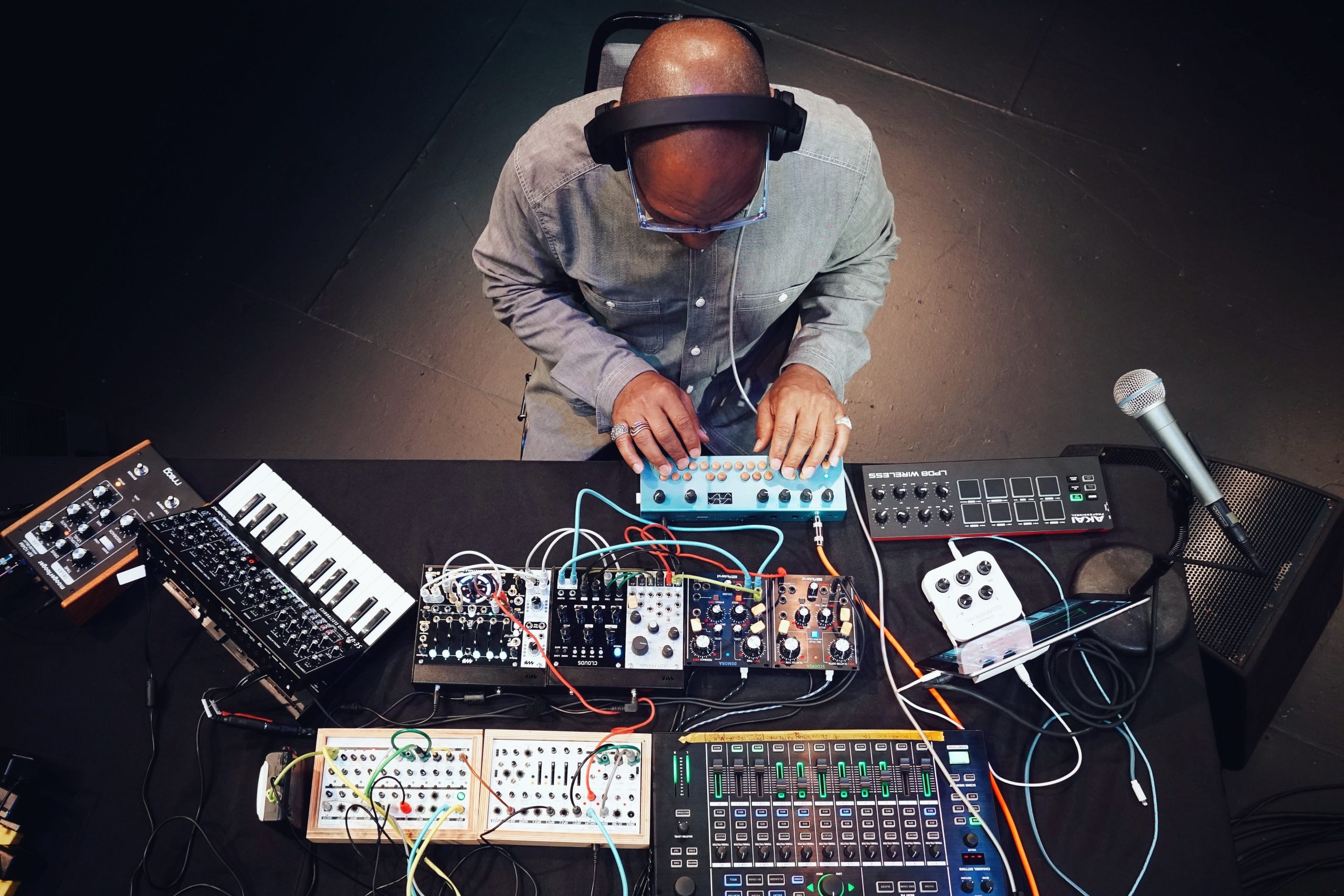 This exhibit celebrates and shines a light on the UC San Diego course Blacktronika: Afrofuturism in Electronic Music, which was created by music professor and music industry practitioner, King James Britt. Throughout Winter Quarter 2023, view an assortment of Professor Britt’s exciting course materials, a selection of vintage and current electronica instruments-of-interest, and ephemera associated with Britt’s career and his current research.

Blacktronika: Afrofuturism in Electronic Music is a new UC San Diego lecture course, created by Professor King James Britt, researching and honoring the people of color who have pioneered groundbreaking genres within the electronic music landscape. Genres span from Chicago House, Detroit Techno and Drum & Bass music. Using his position in the industry, the class has been attended by many, including Questlove, Julian Priester and Flying Lotus.

The Blacktronika: Club Experience pop-up is a physical in-person extension of the Blacktronika: Afrofuturism in Electronic Music course. The course honors all the innovators of color that contribute to the advancement of electronic music. Chicago & NY House, Detroit Techno, Jamaican Dub, Funk, Disco, Hip Hop, Amipiano and more are all rooted in black music. These nights provide a remote course with the opportunity to experience the music the way it is meant to be, on a sound system in a safe space. Also provides an opportunity for all to unite for the rhythm. This event is free and open to the public. Registration is required at music.ucsd.edu/tickets.

Pew Fellowship recipient, King James Britt (his real name), is a 30+ year producer, composer and performer in electronic music. While continuing to be an active force in the music industry, he serves as a Assistant Teaching Professor in Computer Music at UC San Diego. In this role, he carries a unique perspective, bringing a non-linear approach and knowledge to the department by focusing on various modern forms of electronic music pedagogy. King remains one of the go to authorities on Afrofuturism in music.

As a composer and producer, Britt’s practice has led to collaborations with the likes of De La Soul, Alarm Will Sound Orchestra, Saul Williams, director Michael Mann (Miami Vice) and many others, as well as being called for remixes from an eclectic list of giants, including, Meredith Monk, Solange to Calvin Harris and most recently collaborating with MacArthur Fellow, Tyshawn Sorey for an upcoming album project.

In his role as performer, Britt has traveled globally playing thousands of venues and festivals, including AfroPunk (NYC), Berghain (Berlin), MoogFest (Durham), Le Guess Who Festival (Utrecht) and The Kitchen (NYC).  King was also the original DJ for the Grammy Award winning Digable Planets.