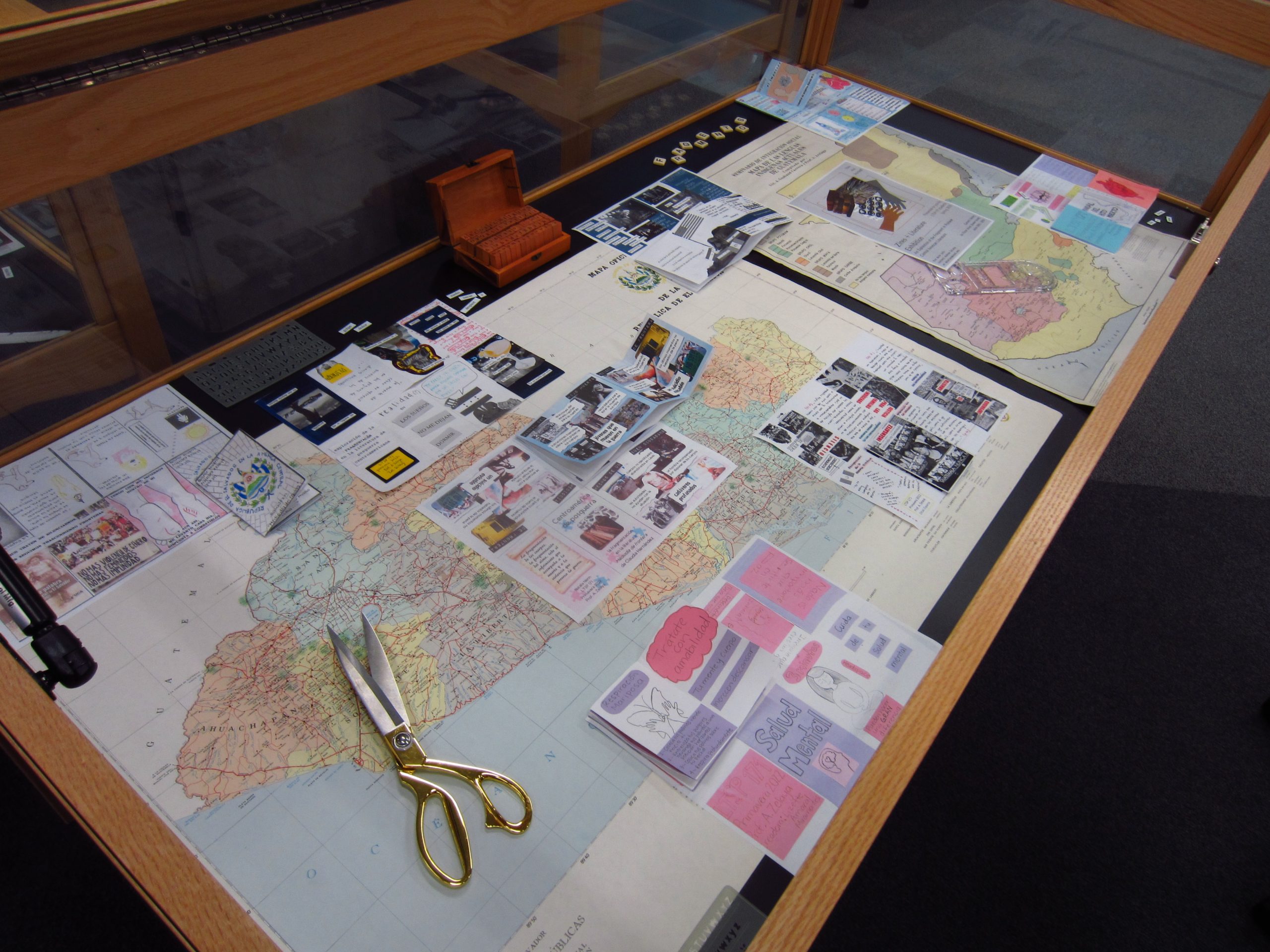 The UC San Diego Library, in partnership with the students of SP22 LTSP 171: El Fragmento en la Literatura Centroamericana de Posguerra, is pleased to present two unique exhibits inspired by the coursework of this Spanish Literature class over the last quarter.

The main installment of the exhibit is located in Geisel Library on the 1st Floor West. Browse custom zines created by the students of LTSP 171 developed as part of their final project to showcase their knowledge and understanding of the course. Also on display are bi-lingual zines in Spanish and English, which are being processed to become part of the Library’s permanent collection; zines donated by artist Yeiry Guevara; and zines on mental health also created by UC San Diego students.

An accompanying exhibit can be found in Geisel Library on the 2nd (main) Floor West. This exhibit aims to bring attention to the idea of fragmented forms of media and lay the foundation for the main installment of student work. Favorite zine “how to” books and novelty zine tools (specialty staplers, binding supplies, booklet folding techniques) are included.

About the Course LTSP 171

El Fragmento en la Literatura Centroamericana de Posguerra is a Spanish Literature class in which students explore and analyze Central American literature written in the last decade of the 20th century and onward, focusing primarily on the genres of the novel and short story and engaging with literary works from Guatemala, El Salvador, Honduras and Nicaragua. Students complement their reading of these texts with other types of cultural production such as articles, film, documentaries, archival documents, interviews, etc. to obtain a deeper understanding of the socioeconomic, political and historical context of the region during the war and postwar periods.

The signing of the peace treaties in the 1990s marked the end of the armed conflicts in the region; however, far from a peaceful transition, the postwar period has been characterized by continued systemic inequality and violence. Postwar Central American literature reflects the disenchantment of this contradiction and is characterized by a dystopian aesthetic, in contrast to the utopian sensibility associated with the revolutionary struggle of previous decades.

The concept of the fragment is pivotal to our dive into postwar Central American literature, as fragments — commonly perceived simply as broken or incomplete — serve as instruments of protest. For their final project, students created zines to showcase their knowledge and understanding of the course. Zines are, in turn, composed of fragments, and have historically served as a tool of empowerment through free and radical expression. Also gaining popularity in the 1990s, zines are significant to alternative and counter-culture movements, as they spread ideas that defy the status quo.