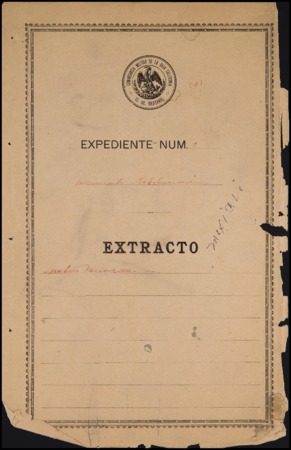 Expediente No. 7. Correspondence of Mayor Miguel Martínez Carmona, Francisco Vázquez, and an Undersecretary of State regarding Mexican Revolution in Baja California. Communication from the consul in El Paso, Texas, in which he says that he has reasons to believe that the rebels will once again attack the Port of Guaymas in Sonora. To take defensive measure, Pedro Torres was commissioned to recruit people in Phoenix and in Arizona. Also, he says another attack in Baja California is expected. Of Carranza, the letter adds that little is known about him, only that he is headed to Chihuahua. Also, Pesqueira and Obregón will pretend to form a column to penetrate in Tepic and take Jalisco, but before that they are heading to Cananea to grab provisions and ammunitions (dated December 29, 1913). Letter from the governor of BC, Francisco Vázquez, telling that he is aware of the possible invasion to the territory and he is taking measures (January, 1914). Letter from the subsecretary to the governor of BC, informing that the Mexican consul in Tucson, Arizona informed that Martin Espinos is headed that way by train to go afterwards west, and he believes that this could be a movement to head to Baja California. The letter adds that in Sonora troops are preparing to enter Baja California, led by Lucio Blanco and Antonio Legaspi, who was born in BC (January 22, 1914). Signed letter from the governor of BC, Vázquez, informing that he received the last letter and that he is aware of a possible invasion (February 17, 1914). Letter from the Subsecretary to the governor of BC reporting the Consul from Douglas, Arizona informed that a secret meeting is taking place in Agua Prieta, presided by various rebel leaders. The nature of the meeting is unknown, but the Consul says that it's probably that the rebels, confident of victory, deliberated about the conditions of peace (June 27, 1913).

This digital file is a surrogate of an item from the Baja California Government Documents Collection (Box 1, Folder 16).