que tu familia no viva el drama de la guerra es ayudar a la victoria final, Do not let your family live the drama of the war: To evacuate Madrid is to help in the final victory 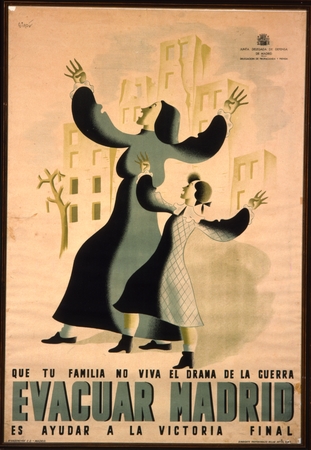 When Madrid was first attacked by rebel forces in November 1936, thousands of the city's inhabitants fled to safety. By the end of November, over 250,000 women, children and seniors-about one-fifth of the city's total population-had relocated themselves to safer zones in Valencia and Barcelona. When the fighting stabilized in December, this spontaneous and voluntary emigration slowed dramatically. In response, the government of the city, then in the hands of the Junta Delegada de Defensa de Madrid, waged a campaign to encourage people to leave the capital. By depicting a woman and her daughter screaming while they look into the sky as if they see enemy bombers approaching, this image aims to convey the message that those not essential to the war effort should leave Madrid.
The need to evacuate the city was dire for several reasons. First, the population was much larger than normal because tens of thousands of Spaniards had poured into Madrid in the early months of the war as the rebels moved northward through central Spain. As Madrid's inhabitants were forced to abandon large sections of the city due to fighting, this increased population pressure was made worse. Perhaps most important was the fear of high civilian casualties from the heavy bombing that accompanied Franco's attacks. Despite the dreadful living conditions, the propaganda campaign was largely ignored by residents of Madrid who continued to wait in ration lines to buy everything from bread to wood and who witnessed daily the destruction of their city and the deaths of their loved ones. In December 1936, the Republican government mandated that all inhabitants of the city who had arrived after July 19, 1936 and were not essential to the war effort must leave. A month later, the government called for a more complete evacuation by eliminating the date of arrival clause, so that even long-time residents of Madrid had to go. Even after these measures, only 5,000 people left Madrid daily.
Contemporary explanations for the reluctance of madrileños to relocate included unwillingness to lose their homes and belongings, and fear of being separated from loved ones. In his memoirs, one contemporary recalls with frustration the resistance to the evacuation: "The display of heroism by the civilian population, sacrificing themselves futilely, bordered on stupidity."
This poster was distributed between mid-December 1936, when the government of Madrid began its intensive effort to evacuate the city, and April 1937, when the issuing entity was dissolved. Little is known of the designer Girón, other than he worked for the Junta Delegada de Defensa de Madrid and the Ministerio de Propaganda.

Constraint(s) on Use: This work may be protected by the U.S. Copyright Law (Title 17, U.S.C.). Use of this work beyond that allowed by "fair use" requires written permission of the copyright holder(s). Responsibility for obtaining permissions and any use and distribution of this work rests exclusively with the user and not the UC San Diego Library. Inquiries can be made to the UC San Diego Library program having custody of the work.