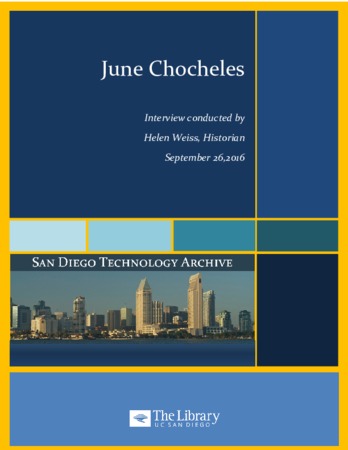 Ms. Chocheles had a distinguished 23 year career at Science Applications International Corporation (SAIC) from 1983 – 2006. During her tenure she held a variety of positions focused on program management, operations and business development. As Vice President of Science and Technology Strategy she managed operations for SAIC’s Internal Research and Development (R&D) portfolio that included developing and rolling out company-wide systems to support program activities. She and contributed to the strategy, team formation and capture of R&D contracts, primarily in the federal defense sector. June managed the company’s Research and Development Business Acquisition Committee Meetings, Quarterly Research and Development Sessions and served as a member of the SAIC’s intellectual property protection and commercialization team, Risk Committee, and the 21st Century Leadership mentoring program for high potential employees where she led the team who developed the program’s core curriculum.

As the Chief Operating Officer of CONNECT from 2006 – 2007 Ms. Chocheles led the development of operational process improvements establishing a robust foundation to support CONNECT’s mission - providing entrepreneurs in San Diego’s start-up community with the resources and programs to support growth and success.

From 2007-2015, as Principal for Chocheles Consulting Group, she supported the Defense Advanced Research Projects Agency (DARPA) Office of Small Business Programs, and the San Diego Regional Innovation Cluster, working with small tech focused companies on application identification, supply chain insertion and strategic partner identification. During 2007 and 2008, she was a member of UC San Diego’s consultancy Global CONNECT’s and worked as a member of the Department of Labor funded WIRED Initiative’s evaluation team.

Ms. Chocheles is the founder and Chaired Athena San Diego’s Pinnacle Century Club Scholarship Fund Campaign from 2003 until 2010. In 2010 she joined the Athena Foundation Board in 2011 and was Board President from 2012-2014. During her tenure, the Athena Scholarship Campaign and Pinnacle event teams increased donations to between $75 -$100K annually. Since 2001 Athena has awarded scholarships to more than 75 young women pursuing undergraduate studies in STEM fields.
Ms. Chocheles is also a member of the San Diego Chapter of Achievement Rewards for College Scientists (ARCS) Foundation that awards funding to PhD students in STEM fields studying at UC San Diego, SDSU, USD and The Scripps Research Institute. She was previously a member of, and chaired, the ARCS Community Advisory Council (ARCS) providing mentoring and networking opportunities for ARCS scholars within the San Diego business and government communities.
Ms. Chocheles is a recipient of the YWCA Tribute to Women in Industry (TWIN) award, Athena Pinnacle Technology award and the Athena Pinnacle Chairman’s award.
Ms. Chocheles is a classical violinist, a fine artist and over the years has dabbled in a variety of sports including biking, mountain biking, swimming, sculling, yoga, and running.