[Collection of five letters relating to Father Pedro Benito Cambón, the San Diego Mission, and the importation of church decorations for the California Missions], 1781- 1782 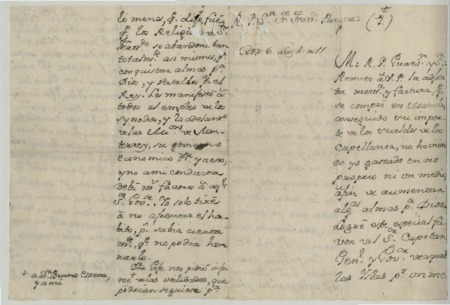 Collection of five holograph letters (on seven leaves), including one letter from Fr. Pedro Benito Cambón, dated at San Diego, Dec. 14, 1781, addressed to Fr. Francisco Pangua of the College of San Fernando in Mexico, concerning the diversion of the San Blas supply ship fleet from the California missions to Manila due to the war with England. Cambón also mentions imported fancy goods from China and India brought to California via Manila. The remaining four letters, written from San Blas in 1782, are by Francisco Trillo y Bermúdez, the naval commissary of San Blas. Topics include the importation of church decorations to California from Manila, the needs of the Indian neophytes in the California missions, as well as other administrative details concerning the missions and the establishment at San Blas. Reference is made to various ships: the Favorita, the Princesa, and the Sonora