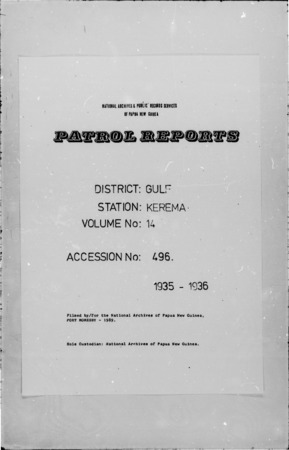 This volume contains patrols over long periods that focused on inspections of coconut and rubber plantations, gold dredging operations, villages, roads, fences, and general infrastructure in the Gulf District, Kerema, 1935-1936. Patrol Officers took regular census information and recorded precise knowledge of men, women, children, infants, marriage, death, and general health and disease. Also included was information regarding family bonus, wages, payments (including other than money payments), building and bridge construction, carriers employed, patrols and police taken on patrol, canoe and boat transportation matters. Also included is information on a burial and local customs having to do with puri-puri, or sorcery. Lastly, regular correspondence was kept between government/administration and the patrol officers on the patrols, which discussed legal, law, and court matters for natives.

Constraint(s) on Use: This work is protected by the copyright law. Use of this work beyond that allowed by the applicable copyright statute requires written permission of the copyright holder(s). Responsibility for obtaining permissions and any use and distribution of this work rests exclusively with the user and not the UC San Diego Library. Inquiries can be made to the UC San Diego Library program having custody of the work.