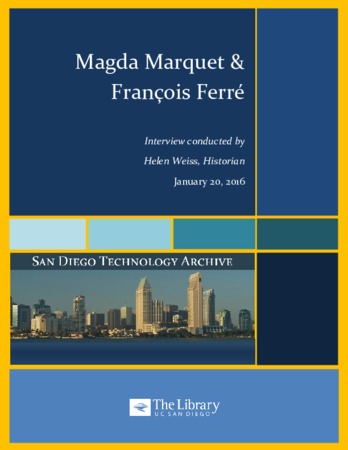 Dr. Marquet is co-Founder and co-CEO of ALMA Life Sciences LLC, an early stage investment firm focusing on the creation and growth of innovative health care companies with an overall focus on prevention. She is co-founder and co-Chairman of Althea (a member of the Ajinomoto Group), and served as its co-President and CEO for ten years. Dr. Marquet is also co-founder of AltheaDx, a spin-off of Althea focusing on companion diagnostics development and pharmacogenomics. She serves as a Board member for Sente, Portable Genomics and Independa. She is also co-Chairman of the Advisory Board of MD Revolution, advisor for Mesa Verde Venture Partners and for City National Bank. She is a Director of BIOCOM and was its Chairman during 2013-2014. She is currently Chairman of the Board of UCSD Moores Cancer Center. She is a member of the Board of Directors of the San Diego Economic Development Corporation (EDC) and of the Kyoto Prize Symposium Organization. She is also a member of the UCSD Biological Sciences Dean Leadership Council. Dr. Marquet has over three decades of experience in the biotechnology industry in the United States and Europe. She was formerly Executive Director of Pharmaceutical Development at Vical Incorporated, where she patented several novel methods for the production of clinical grade DNA for use in gene therapy and DNA vaccines. Prior to joining Vical, Dr. Marquet held management positions at Amylin Pharmaceuticals, Protein Polymer Technologies, Syntro Corporation and Transgene. Dr. Marquet holds a Ph.D. in Biochemical Engineering from INSA/University of Toulouse, France. Dr. Marquet has received numerous awards throughout her career. She was the winner of the 2005 Regional Ernst & Young Entrepreneur of the Year award in the Life Sciences category, the Athena Pinnacle award, the Most Admired CEO award from the San Diego Business Journal and while leading Althea Technologies, received several Best Companies to Work For awards.

Dr. François Ferré is the co-CEO of ALMA LifeSciences LLC, an investment and consulting firm. He is also the Chairman and co-Founder of AltheaDx, a privately-held company (spinoff of Althea Technologies) focusing on the development of pharmacogenomic tests. Dr. Ferré was the CEO of AltheaDx from 2010 to June 2013. Prior to AltheaDx, Dr. Ferré co-founded Althea Technologies and served as co-CEO from 1998 until 2008. He was a Director of Althea Technologies until April 2013 and has recently been appointed a Director of Ajinomoto-Althea after the acquisition of the company by Ajinomoto. He also currently serves on the board of a number of additional private companies including Biomatrica and Portable Genomics. He is also co-Chairman of the Advisory Board of MD Revolution. Dr. Ferré was the winner of the 2005 E&Y Entrepreneur of the Year award in the Life Sciences category. Dr. Ferré is a leader in gene quantification and biomarker development and published several authoritative reviews on these topics, including the co-edition of a bestseller book on PCR with Nobel Prize winner, Dr. Kary Mullis. He received his PhD in molecular oncology from the Pasteur Institute, France and did his post-doctoral training at the University of California, San Diego.