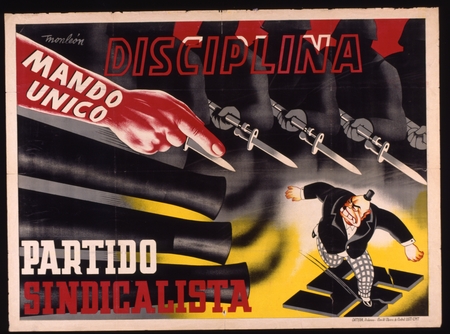 Bayonettes, canon barrels and an accusing finger point to a grotesque man who is fleeing over a shattered swastika

This poster is an admonishment for unified command against the fascists. A group of soldiers have their rifles pointed at fascist, who resembles the stereotypical representation of a businessman, who is standing on a broken swastika. The decision to use the image of a businessman, indicated by the checkered pants and top hat, and associate this figure with the swastika probably was a means to depict the fascists as the party of capitalists. Contrastingly, many of the prominent political groups in Republican Spain were workers' unions that identified themselves with the proletariat.
The soldiers are joined by a red hand and three cannons, all of which are pointed at the fascist in the bottom right corner. Smoke is pouring out of the cannons indicating that they have just been fired. Presumably, the three phrases - discipline, unified command, and syndicalist party - indicate the necessary elements for victory over the fascist. Again, the colors red and black - the revolutionary colors of communists and anarchists in Republican Spain - figure prominently in the depiction of the Republican forces. The relative scale of the figures on the poster reflects the confidence of Republican Spain with its soldiers and cannons towering over the fascist figure, who is hunched over and seems to be fleeing the scene.
The poster was produced by the Worker's Committee of Control under the auspices of Unión General de Trabajadores (UGT) and the Confederación Nacional del Trabajo (CNT). The use of the term "Partido Sindicalista" may refer to the Syndicalist Party formed by Angel Pestaña, a leading member of the CNT, who formed the party in response to the radicalization of the CNT caused by the influence of the anarchist core of the CNT known as the Federación Anarquista Ibérica (FAI). Burnett Bolloten, in his work The Spanish Revolution, deems the Syndicalist Party an insignificant political force during the war especially after the death of Pestaña in 1937 when the party became largely defunct. Consequently, the term "partido sindicalista" may simple refer to the joining of the CNT and UGT around common labor interests. Prior to and during the war, the anarcho-syndicalist CNT and the predominantly socialist UGT were competing labor organizations. Both organizations were composed of a number of different factions with different interests and political agendas. Consequently, these factions from the two different groups could, at times, find common ground in order to work together. Throughout much of the civil war, the two groups worked in concert against the Nationalist threat in spite of the differences between the two groups.
The artist is Manuel Monleón (1904-1976), who also made poster 4 in this exhibit. Monleón, like his contemporary Josep Renau, was trained as a graphic designer and specialized in photomontage. In 1933, Monleón joined the Unión de Escritores y Artistas Proletarios (UEAP) or Union of Proletariat Writers and Artists, which Renau had founded. Also in that year, Monleón participated in an exhibit of revolutionary art in Madrid organized by the Asociación de Escritores y Artistas Revolutionarios (Association of Revolutionary Writers and Artists). During the war, Monleón was quite active and produced posters for the Partido Sindicalista, the Confederación Nacional de Trabajadores (CNT), the Asociación Internacional de Trabajadores (AIT), and the Federación Anarquista Ibérica (FAI).

Constraint(s) on Use: This work may be protected by the U.S. Copyright Law (Title 17, U.S.C.). Use of this work beyond that allowed by "fair use" requires written permission of the copyright holder(s). Responsibility for obtaining permissions and any use and distribution of this work rests exclusively with the user and not the UC San Diego Library. Inquiries can be made to the UC San Diego Library program having custody of the work.