Snake Path: path and bench inside the Garden of Eden 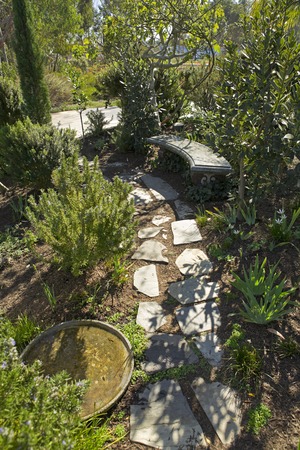 Smith's work for the Stuart Collection, Snake Path, consists of a winding 560-foot-long, 10-foot-wide footpath in the form of a serpent, whose individual scales are hexagonal pieces of colored slate, and whose head is inlaid in the approach to the Geisel Library. The tail wraps around an existing concrete pathway as a snake would wrap itself around a tree limb. Along the way, the serpent's slightly crowned body circles around a small "garden of Eden" with several fruit trees including a pomegranate. There is a marble bench with a quote from Thomas Gray: "Yet ah why should they know their fate/When sorrow never comes too late/And happiness too swiftly flies/Thought would destroy their Paradise/No more, where ignorance is bliss, tis folly to be wise." The path then passes a monumental granite book carved with a quote from Milton's Paradise Lost. "And wilt thou not be loath to leave this Paradise, but shalt possess a Paradise within thee, happier far."