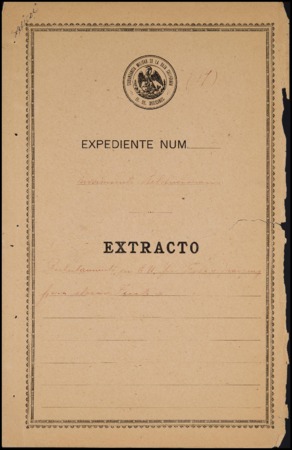 Expediente No. 17. Correspondence with Francisco Vázquez regarding Tirso de la Tova and Juan Márquez recruiting people on the U.S. side at Tecate for an invasion of Baja California. Signed letter from the Gov. Vázquez, informing about the recruitment of soldiers in Tecate on the American side. He adds that he has taken precautions to avoid being surprised by the attack (April 11, 1914). Letter from Gov. Vázquez reporting the imminent attack from Tecate (April 11, 1914). Letter from Gov. Vázquez to Major Mendieta telling him he can permit the rebel leader Tirso de la Toba to enter Baja California so he can capture him (April 13, 1914). Manuscript response from the Major Medieta reporting information given to him by Indians who say that Tirso de la Toba is now in his campsite on the American side, but they aren't allowing any Indians to enter there. Letter from the General of Brigade, reporting he is aware that Márquez and de la Tova are recruiting people on the American side (May 11, 1914). Letter from Gov. Vazquez to Col. Juan Lojero, telling him that the Mexican consul in San Diego says the following: American soldiers are preparing to enter Baja California from a point called "Piel" near Mexicali. There are 250 men there; they have their soldiers dressed as workers. There is another point called Tecate where more troops will enter at the same time, and many soldiers are Indians. Their leader is Enrique Anaya, who is already appointed governor of Baja California. The men are well-armed (April 16, 1914). Letter from a Colonel to the General saying that he is aware of the imminent invasion, and he received the communication from the Mexican Consul in Los Angeles, CA (April 29, 1914). Manuscript letter from Major Mendieta to the General Military Commander of Baja California, informing him that the Mexican Consul in San Diego requested that the General be informed of the military operation to invade Baja California (April 16, 1914).

This digital file is a surrogate of an item from the Baja California Government Documents Collection (Box 1, Folder 18).