The files included in this archive are public records associated with local tax measures that were put before California voters in the years 1986 through 2012. Most of them were collected during the years 2014 to 2016 as part of a research project “Direct Democracy and the Significance of the Framing of Proposals” funded by the National Science Foundation (award number 1421993). Most were acquired by addressing public records requests to relevant county officials, some by making public records requests of city officials, and still others were downloaded from local government web sites or retrieved from public libraries. Rod Kiewiet of the California Institute of Technology also kindly provided our research team with many primary source documents, associated with school district parcel tax measures, which he had acquired by public records requests.

The documents included in the archive include extracts from the official sample ballot and voter information guide, often including the ballot question, impartial summaries, and arguments for and against a given measure; the full text of the proposed ordinance where it was available; and very occasionally other public primary source documents (e.g., city council resolutions, city staff reports) that were provided to us above and beyond what we requested.

The coverage of the archive is incomplete. We have included all such documents from every local government tax measure presented to voters in the state of which we were aware and that we could acquire. We worked from lists published by the California Election Data Archive (beginning in 1995) and the California Debt and Investment Advisory Commission (covering the whole period, but with limited coverage of special elections and elections in odd-numbered years), supplemented by information from local contacts. In some cases, we had reason to believe of the existence of tax measures of which we were unable to locate a surviving documentary record. In other cases, particularly for special elections and elections in odd-numbered years prior to 1995, the archive may omit measures because we were unable to learn of their existence.

All files are in pdf or rtf format. The files are arranged by county. Within county, files are named according to the following convention:

“Year” is the 4-digit year, and in rare cases may include an alphanumeric suffix for the month (e.g. “1990Feb”) in order to disambiguate otherwise identical measures.

“County” is the county name, with spaces omitted.

“Agency” is the name of the relevant local government agency whose revenues are to be provided by the tax, with spaces omitted. The agency name may be omitted if the agency is the county itself and the measure concerns county government revenues. Agency names without further specification generally refer to cities. School districts and other special district types may be abbreviated (e.g. “USD” for unified school district). Some city names may be abbreviated (e.g., “MtShasta”). San Luis Obispo is generally abbreviated “SLO.”

“Letter” is the letter uniquely identifying the measure on that year’s ballot for that jurisdiction. In some cases, a single file may include sample ballot information for multiple measures, in which case the “letter” term in the filename may include multiple letters joined by an ampersand. In a few cases, local governments identified measures by number, or by a combination of letter and number; the identifying information in the filename will generally correspond to how the measure was identified on the ballot. 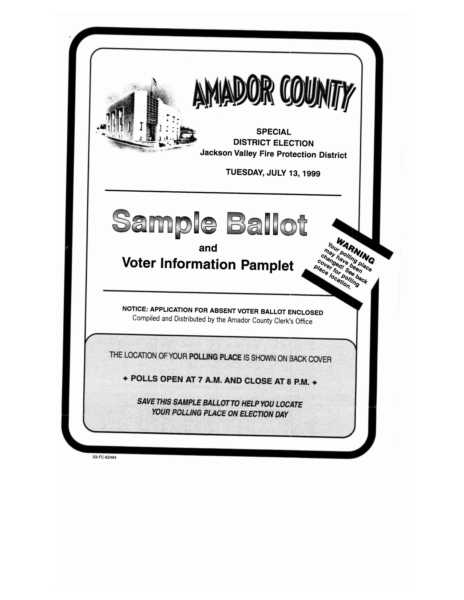