SP2 Black Carbon Particle Number, Size, and Mass: A Single Particle Soot Photometer (SP2; Droplet Measurement Technologies, Inc.) was used to measure aerosol refractory black carbon content for individual particles at the Parque Morelos site. As described by previous researchers (Schwarz et al., 2006), the SP2 measures the thermal radiation emitted by black carbon particles at their boiling point (near 4000 K; Moteki and Kondo, 2010), which is reached upon absorption of a 1064 nm laser generated by a Nd:YAG crystal. The amount of thermal radiation emitted is related to the mass content of black carbon through calibration with Aquadag soot (Acheson Inc., USA) generated with an atomizer and size-selected with a Differential Mobility Atomizer (TSI, Inc. 3071A); the electrical mobility diameters of Aquadag particles are mapped to their effective mass densities through the relationship proposed by Gysel et al. (2011). We report mass concentrations based on calibration curves generated from Aquadag soot, as Aquadag is a consistent reference material that has been used for calibration of SP2s in previous studies (Subramanian et al., 2010; McMeeking et al., 2010, 2011; Metcalf et al., 2012; Setyan et al., 2012; Shank et al., 2012; Liu et al., 2013). Some studies have shown that thermally-denuded diesel soot or commercially produced fullerene soot may be a better proxy for urban BC (Moteki and Kondo, 2010; Laborde et al., 2012), and the use of Aquadag as a calibration material results in w40% lower BC mass compared to diesel BC. However, application of any proposed linear corrections to convert Aquadag-based SP2-BC to a fullerene soot equivalent value (e.g., Baumgardner et al., 2012) will not affect the main conclusions of this study. The Probe Analysis Package for Igor (PAPI) software (Subramanian et al., 2010) was used to aggregate the single-particle measurements into mass and number size distributions and concentrations in 15-min intervals. Reported particle sizes are mass-equivalent diameters of the BC portion only, and do not include the additional volume taken up by coatings and other components agglomerated onto the BC particles. Incandescence signals that saturated the detector were taken to be the upper limit of quantifiable mass, and are included in number and mass concentrations. Comparisons with curves fit to the upper region of the mass size distribution suggests that this approximation does not lead to a significant under-estimation of the total BC mass concentration from integration of the mass size distribution for this study. Given the apparent multimodality in the size distributions and insufficient constraints for accurate fitting of all modes in each size distribution with a single algorithm, a mass median diameter estimate is used in lieu of fitted size distributions for our subsequent analyses.

FTIR Submicron Organic Functional Group Mass: Atmospheric particles were sampled on Teflon filters [with filter changes at approximately 06h00, 14h00, and 18h00 Pacific Standard Time (PST) daily] and analyzed by Fourier Transform Infrared Spectroscopy (FTIR) for organic functional group (OFG) composition. The filters were analyzed immediately after removal from storage for FTIR analysis. Infrared sample spectra were obtained with a Tensor 27 spectrometer (Bruker, Billerica, MA), baselined, and fitted with peaks to identify OFG using the method described by Russell et al. (2009). Using this method, FTIR spectroscopy provides OFG concentrations, including alkane, carboxylic acid, organic hydroxyl, primary amine, and carbonyl groups through chemical bond-based measurements in atmospheric particles collected on a substrate (Russell et al., 2009). Alkene, aromatic, and organosulfate groups were below detection limit for all samples. Our discussion of OM will therefore neglect these compounds; their contribution to the actual OM is estimated to be between 2 and 5%. Ketone group contributions are estimated from a comparison of moles of carboxylic COH and total carbonyl quantified; non-acid carbonyl contributions (including aldehydes and ketones) are determined by the moles of carbonyl present in excess of quantified moles of carboxylic COH. The non-acid carbonyl is determined to be ketonic rather than aldehyde carbonyl, as absorption bands between 2700 cm-1 and 2860 cm-1 indicative of aldehydic hydrogen were not observed in the sample spectra. The uncertainty and detection limit of ketones are therefore estimated through a contribution of the estimated carboxylic COH and total carbonyl (Russell et al., 2009). Estimation of mass is based on the analysis by Russell (2003), where moles of measured bonds are converted to the moles of comprising atoms, and values of OM are calculated from the sum of moles of atoms multiplied by their respective molecular weights. Using this approach, the uncertainty in OM has been calculated to be approximately 21% (Russell, 2003).

About the image: A summary plot showing mass and particle number count distributions for measured black carbon particle diameters for the complete timeline of the project. 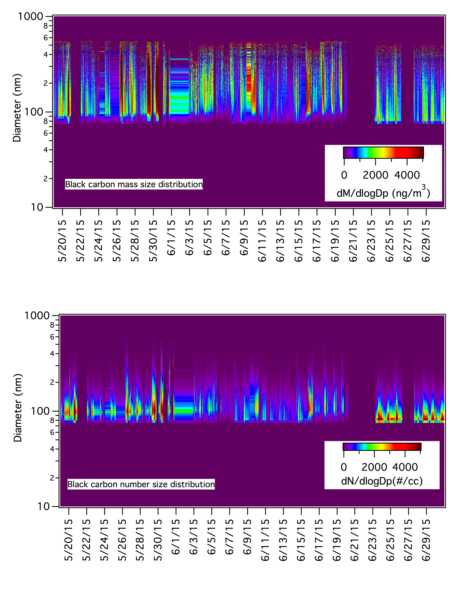