At Look Rock, TN, aerosol instruments used for this study were housed in a 20’x20’x8’ container with air conditioning set to 21 °C. The nozzle of the inlet for air sampling was ~5 m AGL and the site was at an elevation of 802 m. Ambient air was pulled isokinetically through the inlet at about 900 L min-1 using a blower to provide sufficient bypass air to keep flow conditions constant [Bates et al., 2004]. Sampled air lines were dried by diffusion driers in the van before distribution to instruments. Teflon filters (Teflo, Gelman Sciences, Ann Arbor, MI) were collected twice per day after a 2.5 μm cyclone (SCC, Rupprecht & Patashnick, East Greenbush, NY) from 0800 to 1900 and from 2000 to 0700 and four per day behind a 1 μm cyclone from 0800 to 1200, from 1200 to 1600, from 1600 to 1900, and from 2000 to 0700. Flow rates were controlled by mass flow controllers at constant volume flow rates (MCR-100SLPM, Alicat, Tucson, AZ) and recorded. A Bruker Tensor 27 FTIR spectrometer with a deuterated triglycine sulfate (DTGS) detector (Bruker, Waltham, MA) was used to scan the filters both before and after sampling. Filters were loaded each morning and solenoid valves controlled the start and stop of collection; the filter holders were mounted in a 5 ft3 refrigerator to keep the filter holders at 4℃ during and after collection each day to minimize losses due to vaporization of higher vapor pressure components and reactions that could change organic composition during storage. An automated algorithm was then applied to quantify the mass of the organic functional groups [Russell et al., 2009; Takahama et al., 2013]. Five functional groups are presented in the paper: Alkane, Amine, Alcohol, Carbonyl and Carboxylic acid groups. Other groups (Organosulfate, Organonitrate, Aromatic and Alkene group) were also fit but more than 80% of the samples were below detection limit. 42 of the Teflon filters were selected for X-ray fluorescence (XRF) (Chester Labnet, OR) of major elements above 23 amu. The mass of dust was calculated from the metals on these filters by assuming the dust is composed of Na2O, MgCO3, Al2O3, SiO2, K2O, CaCO3, TiO2, Fe2O3, MnO and BaO [Usher et al., 2003]. Samples were also collected at Centreville, Alabama, during SOAS for FTIR analysis by the same procedure.

The light scattering (LS) module of the high-resolution time-of-flight aerodynamic mass spectrometer (AMS, Aerodyne Research, Inc.) uses a 405 nm source that emits a laser beam through the air beam of AMS. The length of the AMS chamber is divided by the difference between the time that the laser light is scattered and the time the chopper allows a particle to enter the chamber to give the particle velocity, which is used to determine the time to record the m/z spectra of that single particle. The AMS was operated with a 6 min duty cycle. Each cycle consisted of V-mode mass spectrum (MS) mode and particle time-of-fight (ptof) mode (2 min), W mode MS (2 min) and a light scattering mode (90 s). The remaining 30 sec in the cycle allowed time for voltage switching between modes.

Measurements of volatile organic compound (VOC) mixing ratios as a function of time from June 11 to July 17, 2013 at Look Rock, TN. Size resolved cloud condensation number concentrations measured as a function of supersaturation. We also report the fraction of particles activated as well as the calculated hygroscopicity (k) parameter.

Measurements of volatile organic compound (VOC) mixing ratios as a function of time from June 11 to July 17, 2013 at Look Rock, TN.

Acknowledgements
The authors appreciate the assistance of Ashley Corrigan and Janin Guzman-Morales in the field. 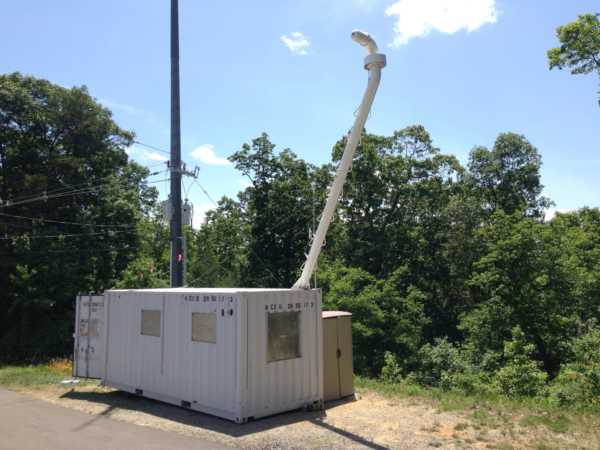