Papers of William Bond (d. 1776), a Revolutionary Army officer and colonel in the 25th Regiment of Foot from Massachusetts. Bond led the regiment from July 1775 to August 31, 1776, when he died from an illness at Mount Independence near Fort Ticonderoga.

Significant among the few items of correspondence is an autograph letter signed by General George Washington (20 May 1776) to Major General Sullivan. Other important correspondence includes four letters from Bond to his wife Lucy in Watertown, Massachusetts.

In addition to war-era letters, the collection contains military orders, printed resolutions by the Massachusetts Provincial Congress, and numerous administrative documents related to Bond's position as commander of the 25th Regiment, such as receipts for supplies and lists of returns of officers, soldiers, deserters, and discharges. Among the signers of these documents are generals Philip Schuyler (5 May 1776), Horatio Gates (15 March 1776), William Heath (14 August 1775), and Nathanael Greene (15 March 1776). 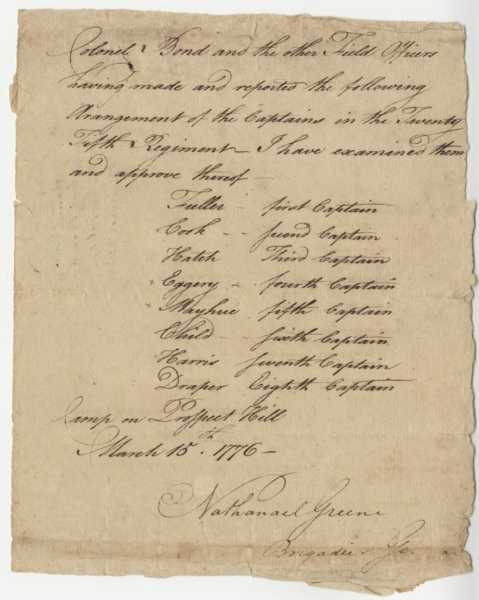