The Oceano Dunes State Vehicular Recreation Area (ODSVRA) is a large natural source of wind-driven dust emissions that typically include nontoxic particles too large to be inhaled. PM2.5 and PM10 near the Oceano Dunes ODSVRA have been observed to be highest in the afternoons during high wind speeds, and May and October were targeted as the months with the highest average wind speeds (California Air Resource Board, 2022). The sampling site was located downwind of the southern edge of the at the California Department of Fire at Arroyo Grande (hereafter “CDF”) (Oceano Dunes SVRA, 2022). This sampling used limited resources to target different aspects of PM2.5 and PM10, with a focus during the initial sampling from 14 May to 2 June 2019 and 23 September to 5 October 2019 on differences in PM2.5 composition at different times of day. These studies showed that afternoons were consistently the highest concentrations, reducing the need for overnight sampling. Comparisons of offline measured chemical components with online PM measurements indicated the need for gravimetric measurements, which were added for all subsequent studies starting with 27 April to 16 May 2020. PM10 chemical measurements were added for 28 September to 10 October 2020, and they were optimized for high-PM10 mass concentrations for 27 April to 24 May 2021. The local time during these sampling periods at CDF was PDT.

Sample Collection
Aerosol particle sampling used sharp-cut cyclones operated with calibrated flows to collect particles for analysis at ambient diameters with a calibrated cut at 2.5 μm (SCC 2.229 operated at 7.5 L min-1, BGI Inc., Waltham, MA) and a louvered PM10 sampling head (operated at 16.7 L min-1) (Tolocka, Peters, Vanderpool, Chen, & Wiener, 2001).). PM2.5 sampling by SCC has been shown to have comparable 50% cutoff sizes and geometric standard deviations when following manufacturer calibrated flow rates (Du et al., 2020). October 2020 and May 2021 also measured PM10 directly after the PM10 sampling head, and in May 2021 flows were split to improve accuracy at high concentrations (with expected loss of data at low concentrations that were below detection), collecting 2 L min-1 for PM10 and 5 L min-1 for PM2.5. flow rates were calibrated at the beginning and end of each campaign, with recordings every 10 sec to document cyclone flow rates to ensure size cutoff performance.

37 mm Teflon filters (Pall Inc., 1 μm pore size) were used as substrates and have shown negligible adsorption of volatile organic compounds (VOCs) on duplicate back filters collected simultaneously with each sample (Gilardoni et al., 2007; Maria et al., 2003). Blank filters provided a measure of adsorption during sampling and contamination during handling and storage. Samples were quality-controlled with the following criteria: filter and cyclone flow rates were within 5% for the duration of sampling, filter pressure increased by >0.01 psi per m3 air collected, and no anomalous readings in pressure, temperature, and relative humidity (as defined by the instrument specifications).

Mass Concentrations
For evaluation of BAM concentrations relative to federal standards, gravimetric analyses were completed for samples collected in 2020 and 2021 by Chester Labnet (Tigard, OR). These filters were weighed prior to sampling to provide filter-specific tare weights. After sampling, filters were weighed again, and the difference between the sampled weight and the tare was the reported gravimetric mass. The weighing procedure for samples used the PM2.5 federal reference method at 35±5% relative humidity for the 24-hour period (logged every 5 min), making the samples drier during weighing than the ambient conditions at which they were collected.

Dust, Sea salt, and Non-Sea Salt Sulfate from XRF Spectroscopy
Sample filters (and associated blank filters) were non-destructively analyzed by X-ray Fluorescence (XRF) measurements conducted by Chester LabNet (Tigard, OR) on the same filters used for gravimetric measurements. XRF analysis provided trace metal concentrations for elements Na and heavier (Maria et al., 2003). The following elements were above the detection limit for 70% or more of the PM2.5 afternoon samples and are used in the results reported here: Na, Mg, Al, Si, S, Cl, K, Ca, Ti, Fe, Zn, Br, and Sr. When Mn was above detection (50% of afternoon PM2.5 samples) and Ba was above detection (35% of the afternoon PM2.5 samples), each was included in the dust calculation and was otherwise assigned to be 0.

Mineral dust was measured above detection if Al and Si were above detection (defined as twice uncertainty), which was true for more than 86% of quality-controlled samples. The mass of dust was calculated from XRF metal concentrations, assuming dust consists of MgCO3, Al2O3 and SiO2 (in the form of Al2SiO5), K2O, CaCO3, TiO2, Fe2O3, MnO, and BaO (Gilardoni et al., 2007; Jun Liu et al., 2018; Usher, Michel, & Grassian, 2003). This calculation increases the mass by an average factor of 2.14 to account for the O and C associated with the measured elements. Because some elements are in both sea salt and mineral dust (K, Ca, Mg), the amount of those elements associated with the Na present was subtracted to avoid double-counting, resulting in ~2% less mass. The mineral dust contribution can also be estimated by calibration to a subset of elements, as discussed in the Supplement (Figure S1) (Frank, 2006; Hains, Chen, Taubman, Doddridge, & Dickerson, 2007; Malm, Sisler, Huffman, Eldred, & Cahill, 1994).

Sea salt was measured above detection when Na and Cl were above detection (defined as twice uncertainty). Atmospheric ambient sea salt concentrations were calculated using measured Cl- and 1.47*Na concentrations to account for the possible depletion of Cl- in the atmosphere, where 1.47 is the ratio of (Na++Mg2++Ca2++K++SO42-+HCO3-)/Na+ in seawater (Frossard et al., 2014; Holland, 1978). This sea-salt calculation represents an upper limit for sea-salt mass because the HCO3- would have been titrated before Cl- was depleted significantly via acid displacement reactions. HCO3- is 0.3% of the mass of sea salt. Excluding HCO3- from the ratio, as a lower limit, the ratio of (Na++Mg2++Ca2++K++SO42-)/Na+  is 1.45, instead of 1.47, making the sea salt mass calculated <2% lower than calculated here.

Non-sea salt sulfate (nss-sulfate) was calculated using measured S concentrations assuming S was present as (NH4)2SO4 and subtracting the amount of SO42- associated with the Na present (Holland, 1978). The semivolatile/unidentified fraction was defined as the difference between filter sample time averaged BAM concentration and the sum of dust, sea salt, nss-sulfate, and organic mass concentrations.

This work was funded by the California Parks and Recreation Contract C18V0003/FS#26915. 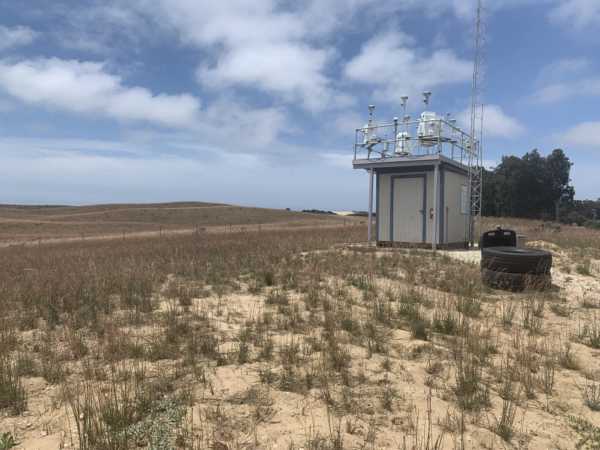