Measurements during the SOCRATES field campaign were performed onboard the NSF/NCAR Gulfstream-V High-performance Instrumented Airborne Platform for Environmental Research (GV HIAPER) observational platform. 15 different research flights (RF, numbered RF1 to RF15) were conducted between 15 January and 24 February 2018, departing Hobart, Tasmania and flying south over the Southern Ocean to about 62°S. The flights included various level legs to sample below, in, and above clouds. More details can be found in Sanchez et al. (in preparation), Twohy et al., (submitted), and McFarquhar et al. (submitted). Particles were collected for later analysis by three methods: (1) a counterflow virtual impactor (CVI; (Noone et al., 1988; Twohy et al., 2003)), with counterflow and heaters off for below cloud and above cloud samples, (2) CVI with counterflow and heaters on for cloud droplet residuals, and (3) a Continuous Flow Diffusion Chamber (CFDC) for Ice Nucleating Particles (INP). No CVI samples were collected in icing conditions. Below and above cloud particles from the HIAPER Modular Inlet (HIMIL; (Stith et al., 2009), cloud droplet residuals from the CVI, and INP from the CFDC were impacted on carbon-coated electron microscope grids for subsequent scanning transmission electron microscopy (STEM) analysis and on silicon nitride windows (Si3N4; Silson Ltd., 0.5 x 0.5 mm dimension and 0.1 µm thickness) for STXM-NEXAFS analysis. INP from near the ocean surface were also collected aboard the Australian R/V Investigator ship using a duplicate CFDC as part of the Clouds Aerosols Precipitation Radiation and atmospheric Composition over the Southern Ocean (CAPRICORN) II experiment. Ambient and cloud residuals were collected in two different dry size ranges, ~0.1 – 0.5 µm diameter and >0.5 µm in diameter.
Particles were analyzed offline at the Lawrence Berkeley National Laboratories (LBL) Advanced Light Source (ALS) Beamline 5.3.2. by scanning transmission X-ray microscope (STXM) with near edge X-ray absorption fine structure (NEXAFS) following established protocols (Russell, Maria and Myneni, 2002; Maria et al., 2004). STXM-NEXAFS characterizes organic functional groups in the collected particles based on the energy of radiation absorbed near the carbon edge. 15 samples collected during different legs for RF01, RF08, and RF12-15 (with collection times varying between 2 and 5 minutes) were analyzed to collect 159 complete particle stacks of spectra. These 159 particles were analyzed by an automated shape-recognition algorithm, which identified areas of high pre-edge density (non-carbon components) and high carbon density (post-edge minus pre-edge) (Takahama, Liu and Russell, 2010). 99 particles (61%) passed data quality control checks, which removed particles for which the carbon absorbance was within the noise, and, of those 99 particles, 96 particles had spectra with sufficient signal to categorize. STXM-NEXAFS relies on manual identification of particles within the collected windows as targets for detailed, high resolution mapping. Finding micron-sized particles on millimeter windows relies on the density of collection and the optical density of the particles. The beamline time available for this project included four sessions with nine 8-hour shifts each, but the fourth session in late March 2020 was cancelled due to the COVID19 closure of ALS. The sizes of particles retrieved by STXM were between 0.25 µm at the 5th percentile and 1.75 µm at the 95th percentile. All but one of the samples analyzed were collected on an impactor with nominal 0.5 µm lower cut size, resulting in less than 25% of the analyzed particles <0.5 µm diameter and only two <0.2 µm diameter. Approximately 30% of particles had geometric diameter larger than 1 µm. Note that this implies that the organic functional groups reported in this study are mostly representative of particles in the larger end of the accumulation mode and in the coarse mode, which represent a large fraction of the mass but very few of the total number of particles in the MBL. For this reason, we do not expect the STXM-NEXAFS composition to be representative of the majority of CCN-sized particles. In addition, at approximately six particles per sample, counting statistics imply that the particle types for any one sample should be considered qualitatively but not quantitatively. 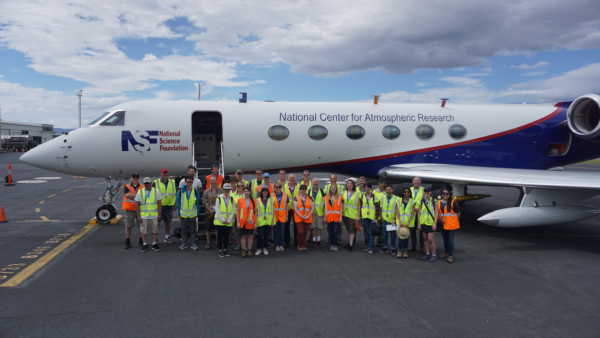