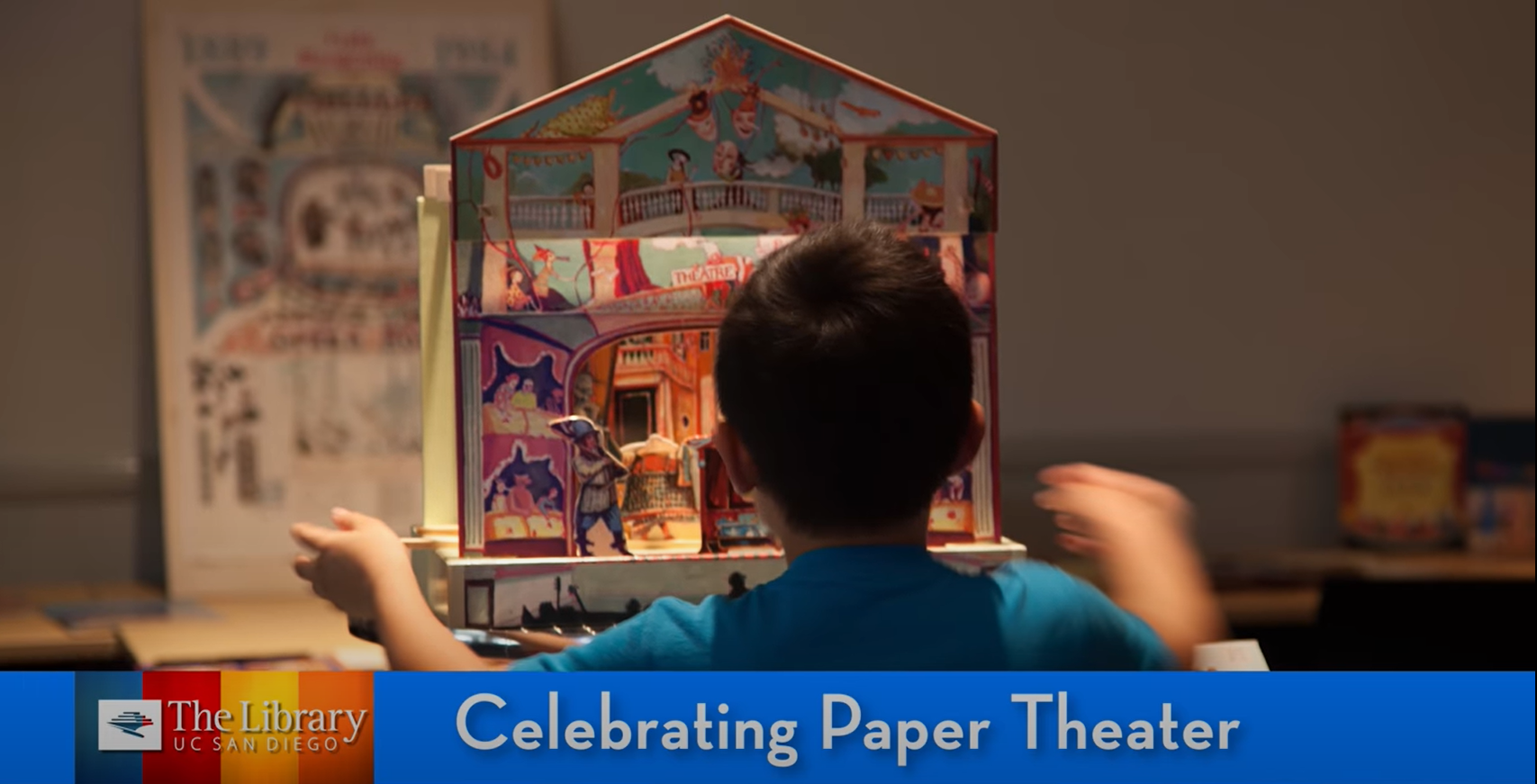 Although life looks different with social distancing, we want to continue to inspire you to read, write, think and dream. Check out these highlights from The Library Channel on UCTV, featuring some of our most watched interviews, author talks, and more.

Paper theaters, a Victorian art form, gradually declined in popularity during the late 19th and early 20th centuries, but have enjoyed a resurgence in interest in recent years among many puppeteers, filmmakers, theater historians, and hobbyists. Learn how the Library celebrates the history and creativity of paper theaters at our annual Paper Theater Festival.

2. Learning in the Age of Google

Dan Russell, the Űber Tech Lead for Search Quality and User Happiness at Google, reviews what literacy means today and shows how some very surprising and unexpected skills will turn out to be critical in the years ahead.

3. An Evening with Luis Alberto Urrea – Dinner in the Library 2018

San Diego-raised novelist and UC San Diego alumnus, Luis Alberto Urrea ’77 is the featured speaker at the UC San Diego Library annual gala. Urrea, a 2005 Pulitzer Prize finalist, has written about the border and has knitted together stories in a way that makes them familiar and impactful for everyone.

Constructed languages, or conlangs, are well-known in science fiction and fantasy literature as ways of creating an immersive world-building experience. Join us in learning how linguists design the sound systems and grammars to behind some of our favorite conlangs. With Grant Goodall (Professor and Language Program Director, UC San Diego Linguistics), David J. Peterson (Creator of Dothraki, Game of Thrones), and Paul Frommer (Creator of Na’vi, Avatar).

Cosmologist and author of Losing the Nobel Prize Brian Keating provocatively argues that the Nobel Prize, instead of advancing scientific progress, may actually hamper it, encouraging speed and greed while punishing collaboration and bold innovation. In a thoughtful reappraisal of the wishes of Alfred Nobel, Keating offers practical solutions for reforming the prize, providing a vision of a scientific future in which cosmologists may, finally, be able to see all the way back to the very beginning.

6. Improving Openness and Innovation in Scholarly Communication with Brian Nosek

Brian Nosek, co-founder and executive director of the Center for Open Science, outlines the most urgent challenges in achieving a more open science future and how the scholarly communication community can change practices to validate and recognize open research. Nosek, a professor of psychology at the University of Virginia, is presented by the UC San Diego Library.

The film Blade Runner was set in a dystopian 2019 Los Angeles. A timely gathering is in order. Three futurists sit down for a conversation on the film’s legacy and its relevance to Southern California. Guest speakers David Brin, Paul Sammon and Mike Davis discuss the film’s influence and compare its vision with today’s 2019.

8. The Perfect Predator: A Scientist’s Race to Save Her Husband from a Deadly Superbug with Steffanie Strathdee and Thomas Patterson

Delve into the realms of predatory superbugs with infectious disease epidemiologist Steffanie Strathdee and her husband, psychologist Thomas Patterson. This is an incredible story of Strathdee’s fight to save her husband’s life, which led her to rediscover a forgotten treatment for antibiotic-resistant bacteria. This unprecedented treatment saved Patterson’s life as well as several others and helped launch the Center for Innovative Phage Applications and Therapeutics (IPATH) at UC San Diego, the first phage therapy center in North America.

9. Against All Odds: Born in Mauthausen with Eva Clarke — Holocaust Living History Workshop

What does it mean to be born in a concentration camp, arguably one of the most inhospitable places on earth? Eva Clarke was one of three “miracle babies” who saw the light of day in KZ Mauthausen in Austria. Nine days after her birth, the Second World War ended. As a newborn, Eva’s chances of survival were extremely slim; against all odds, she lived, making her and her mother Anka the only survivors of their extended family. Hear her extraordinary story in this Holocaust Living History Workshop lecture.

10. Surviving the Bleakness of The News with Ari Shapiro

Journalist Ari Shapiro shares his healthy approach to an onslaught of bleak world news. Shapiro’s passion for literature has inspired him to find and report great stories in Washington, Europe and elsewhere around the world in his remarkable rise from radio intern to co-host of NPR’s flagship news program, All Things Considered. Shapiro is the featured speaker at the 2016 Dinner in the Library event at the Geisel Library at UC San Diego.