Giving the Gift of Knowledge 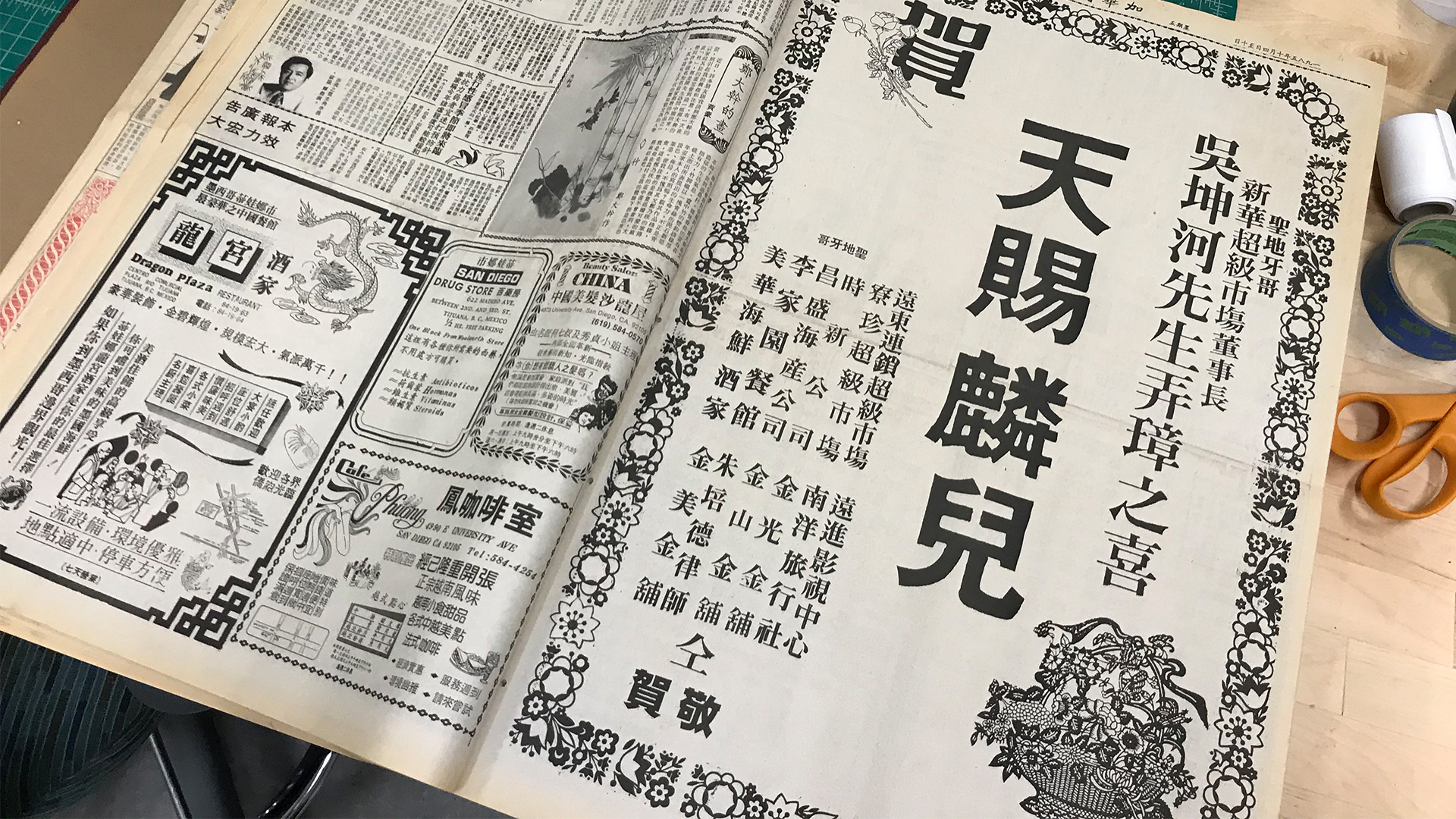 “Give and not to count the cost; give and not to ask for any reward” is the motto of dedicated community member and philanthropist, Sally WongAvery. Serving the Chinese community and preserving Chinese culture, heritage, and history have been paramount throughout her life, which is one of the reasons why she helped facilitate the donation of 13 volumes of San Diego Chinese News—the first Chinese language newspaper published in San Diego—to the UC San Diego Library.

WongAvery’s generosity makes our Library the only research library on the West Coast to hold the bound volumes and the first to provide digitized copies of the newspaper. She hopes that by adding the volumes to the Library’s collections, researchers from various fields will be able to glean information about the multicultural history and the contributions of San Diego’s Chinese population.

Born in Hong Kong, WongAvery came to the United States in 1969 and finished her high school education at San Diego High. During that time, San Diego had a small Chinese population of only a few thousand individuals. Today, nearly 50,000 Chinese Americans call San Diego home, including WongAvery, who attended UC San Diego and graduated with a degree in philosophy in 1975.

The volumes comprise every edition of the Chinese News printed between 1983 and 1998, when the newspaper ceased publication. Thriving throughout the 1980s and 1990s, the newspaper served as a focal point for Chinese speakers in the greater San Diego area by disseminating global, national, and local news; connecting readers with services; and facilitating trade and commerce in the local communities.

“Chinese News has a special place in my heart because it was the first publication produced for the non-English speaking Chinese population in San Diego,” said WongAvery. “The publisher knew the challenges that these newcomers faced, not knowing how to read or speak English, so the publication was provided free of charge to keep all Chinese Americans informed and connected with the greater community.”

In the coming months, students and researchers will be able to peruse individual issues, all of which dedicate a considerable amount of space to the advertisements of local businesses—many of those being restaurants and grocery stores. Chinese Studies Librarian Xi Chen notes, “These volumes are great primary sources for the study of ethnic cuisines/Chinese food in the United States, which indeed are of scholarly interest to some researchers.”

Advertisements aside, the newspaper occasionally included the announcement of births, marriages, and deaths, all fitting sources for history enthusiasts and community members conducting genealogy research. The newspapers also included detailed information on the activities of various community organizations, many of which were active participants of local politics, making the volumes unique primary and secondary sources for the anthropological study of Chinese Americans in San Diego and Southern California.

Thanks to a generous gift from the Avery-Tsui Foundation, all 13 volumes will be digitized, preserved, and made available to the UC San Diego community, outside researchers, and the public through the Library’s Digital Collections.

“As a Chinese American born and raised in San Diego, the newspaper volumes are an important part of one of the oldest ethnic groups in the United States,” said Natasha Wong, WongAvery’s daughter. “These volumes tell the story of the Chinese in San Diego on a social, economic, and political level.  Because UC San Diego holds a special connection to our family and is one of the world’s leading public research universities, it is most appropriate that UC San Diego preserves these volumes for future generations.”

The digitized collection, known as the Sally T. WongAvery Collection of Chinese Materials, will be available in Fall 2020. In the meantime, we encourage you to visit lib.ucsd.edu/east-asia-collection to learn more about the Library’s Chinese and East Asia Collection.